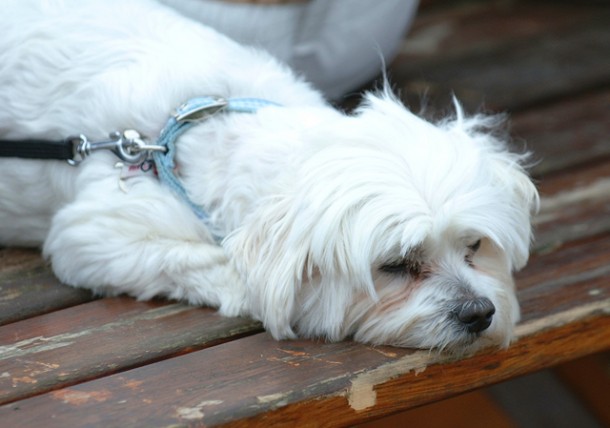 Cinnamon, a young standard poodle, hadn’t been quite herself—sluggish on and off, some vomiting, a little diarrhea—until one afternoon, she collapsed while playing with the dog next door.

After intravenous fluids and cortisoneA hormone produced by the adrenal cortex. One of the glucocorticoids, it is also made synthetically for use as an anti-inflammatory and anti-allergy agent., she looked like a new dog. Blood tests revealed that she was suffering from Addison’s Disease, which involves severely underactive adrenal glandsAre chiefly responsible for releasing hormones in response to stress. or hypoadrenocorticismA glandular disorder caused by failure of function of the cortex of the adrenal gland and marked by anemia and prostration with brownish skin. in dogs. This condition results in a deficiency of two groups of stress-related hormones that manage blood glucoseA simple sugar that is an important energy source in living organisms and is a component of many carbohydrates. (glucocorticoids) and keep electrolytes balanced (mineralocorticoids). Cinnamon’s Addisonian crisis could easily have been fatal if not recognized and treated quickly. Fortunately, intravenous fluids containing electrolytesA liquid or gel that contains ions and can be decomposed by electrolysis. and cortisone are common shock therapy tools that supply patients with what their bodies are lacking.

What is Addison’s Disease?

Addison’s is most common in young to middle-aged female dogs. Inherited forms occur in standard poodles, bearded collies, Nova Scotia duck-tolling retrievers and the Portuguese water dog. However, it can affect any breed, age, sex and, less often, cats. It may occur alongside other endocrineOf, relating to, or denoting glands that secrete hormones or other products directly into the blood. diseases such as diabetes and hypothyroidismAbnormally low activity of the thyroid gland, resulting in retardation of growth and mental development in children and adults. (underactive thyroid).

While lab work, radiographs and ultrasound help with the diagnosis and are valuable in ruling out lookalike or co-existing illnesses, the diagnostic gold standard is the ACTH stimulation test. Adrenocorticotrophic hormone, or ACTH, is a chemical made by the pituitaryThe major endocrine gland. A pea-sized body attached to the base of the brain, the pituitary is important in controlling growth and development and the functioning of the other endocrine glands. gland that turns adrenal hormone production on and off. The test is performed by injecting ACTH and drawing blood samples an hour apart, during which time cortisolAnother term for hydrocortisone. levels should jump dramatically. In most canine Addison’s patients, the adrenal response will be poor or absent, meaning that cortisol will start low and remain low.

Addison’s is called “the great pretender” because early symptoms may be mild and intermittent, fooling even observant owners and astute veterinarians. First, many young animals have tummy upsets and “off” days because of their fondness for eating things they shouldn’t. Second, intravenous fluids and cortisone are a routine first line of treatment for sick pets and will cause a dramatic improvement in many illnesses, not just Addison’s. Additionally, cortisone administration can muddle or even invalidate the ACTH stimulation test.

To add to the confusion, some of the less common symptoms and lab findings—drinking and urinating excessively, seizures, severe bloody diarrhea or vomiting, dilated esophagusEsophageal dilation is a procedure that allows your doctor to dilate, or stretch, a narrowed area of your esophagus (swallowing tube). (megaesophagus), abdominal pain, low blood sugar, high kidney or liver values, anemia, high cholesterol—mimic dozens of other diseases.

Even more confounding is a variation called Atypical Addison’s Disease, in which the hallmark finding—an upside-down electrolyte ratio—is deceptively normal. This means glucocorticoidAny of a group of corticosteroids (e.g., hydrocortisone) that are involved in the metabolism of carbohydrates, proteins, and fats and have anti-inflammatory activity. production has failed but the mineralocorticoidA corticosteroid, such as aldosterone, that is involved with maintaining the salt balance in the body.-producing adrenal layer is functioning. Fortunately for the savvy, still-suspicious veterinarian, an ACTH stimulation will remain abnormal and tell the tale.

Causes and Treatment of Addison’s Disease

Causes may be primary (direct, usually permanent, destruction of the adrenals so they can no longer respond to ACTH) or secondary (in which the pituitary stops producing ACTH so the adrenals wither). Most primary Addison’s is thought to be due to attacks by the immune system, while secondary Addison’s usually occurs after chronic cortisone use, with symptoms appearing if the drug is discontinued too quickly. With this form of secondary Addison’s, the withered adrenals may recover if cortisone use can be tapered slowly. Other triggers include cancer, inflammation, amyloidosisA disorder marked by deposition of amyloid–insoluble fibrous protein aggregates–in the body., direct trauma, injury to blood vessels supplying the glands and certain drugs that reduce pituitary or adrenal function.

Treatment consists of hormone replacement via daily pills or convenient but pricier monthly injections, with extra medication often needed during times of stress (boarding, travel or surgery). Cinnamon will be monitored closely for a few months until regulated, but her quality of life should be excellent as long as her owners are compliant with the life-long therapy.

Heather McCauley, DVM, is a graduate of University of Florida College of Veterinary Medicine who lives near Rockwall, Texas. Dr. McCauley practices as a relief veterinarian serving the eastern Dallas metroplex to Tyler areas for McCauley Veterinary Services.