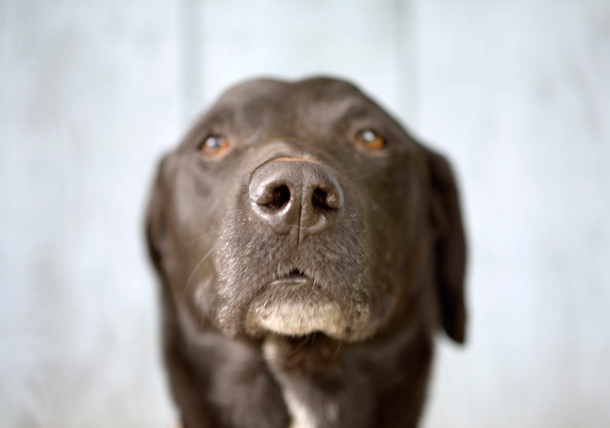 Canine Cognitive Dysfunction Syndrome (CCDS) is a brain disorder akin to Alzheimer’s disease in people. It is most often seen in dogs older than nine years of age. Owners usually first notice small changes that they may attribute to normal aging. These changes can progress over time to the point that they begin to negatively affect the quality of life of both dog and owner. Early evaluation and intervention by a veterinarian can help slow the progression of this disease, so it is important to discuss any symptoms of this Alzheimer’s like disease with your veterinarian during your dog’s senior wellness visits.

Dogs with CCDS are not just getting “old”; their brains are truly undergoing changes that result in the signs the owner is observing, which is actually a disease. The dog has impaired thinking, recognition, memory and changes in behavior. There have been a few theories proposed for the cause of CCDS. One is that, similar to Alzheimer’s, a protein called Beta-amyloid is deposited in the brain and forms plaques that result in cell death and brain damage. It has also been suggested that changes in various neurotransmittersA chemical substance that is released at the end of a nerve fiber by the arrival of a nerve impulse and, by diffusing across the synapse or junction, causes the transfer of the impulse to another nerve fiber, a muscle fiber, or some other structure. may play a role. Cognitive Dysfunction Syndrome in canines is very common, and many dogs over the age of nine will experience at least some of the hallmark features of the disease. It is also important to understand that CCDS is a progressive brain disorder and that senile behaviors will increase over time.

Signs to Watch For with Canine Cognitive Dysfunction Syndrome

Owners should be aware of the signs of CCDS and differentiate them from normal aging. Any deviation from what is normal should be brought to your veterinarian’s attention. Increased sleep can be one of the first signs seen. This is often followed by the dog being awake more during the nighttime. If observed at night, the owner will often notice that the dog is pacing, aimlessly wandering or vocalizing (barking or whining). Disorientation is quite common as well and is a sign of CCDS. This manifests as the dog getting lost in once-familiar places, getting stuck in corners or between the toilet and the wall or having a hard time finding the door to go outside. It is also common for dogs that were once housetrained to begin urinating and defecating in the house. Some dogs suddenly seem not to recognize people they used to know or forget commands and tricks they once knew. The dog may seem less enthusiastic about daily activities such as playing and walking or may sleep more. Dogs with CCDS may also exhibit excessive circling, shaking or pacing. These are all signs of CCDS, but some can be signs of other diseases as well, including urinary tract infections, brain lesions, cancer and many others, so it is imperative that the dog be fully evaluated by a veterinarian to rule out all other medical issues.

Unfortunately, there is no specific test for CCDS. Your veterinarian will make a diagnosis based on a thorough physical exam, history and by ruling out other causes for the signs your dog is displaying. Treatment consists of a multi-faceted approach through medications, diet, specific dietary supplements and tailoring your dog’s environment to fit its lifestyle. There is some evidence that a structured training and environmental stimulation program may slow the progression of behavioral deterioration. Anipryl (selegiline) is often prescribed as a daily medication and may help ease the signs of CCDS. For periodic severe episodes at night, Xanax (alprazolam) can also be prescribed. A prescription diet that supports an older dog’s brain, along with other neutraceutical medications, can also be helpful.

While this disease is not curable, its negative effects may be reduced through close communication and teamwork with your veterinarian to hopefully give your older dog the best quality of life possible during its golden years.