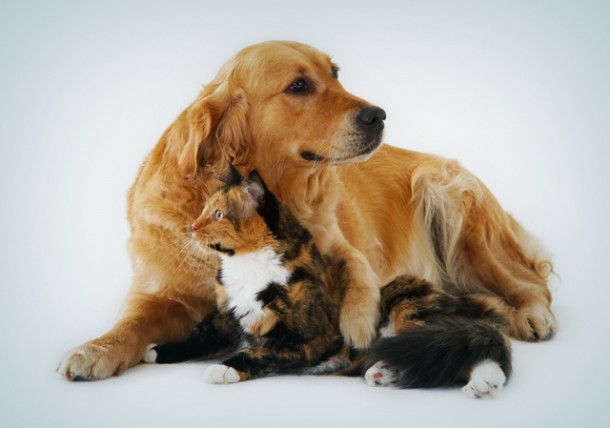 Bloat, also called Gastric Dilation and Volvulus (GDV), is one of the most serious emergencies your pet can face. When a GDV occurs, the stomach distends with air and twists on itself, closing off the entrance and exit. A bloat occurs when the stomach twists either 180 or 360 degrees. Sometimes bloat occurs following eating or exercising, but it can also occur hours after eating and without exercise. Although bloat is more common in large and giant-sized deep-chested dogs (e.g., Great Danes, Dobermans, German Shepherds and Mastiffs), it can occur in any breed of dog but rarely occurs in cats, ferrets and guinea pigs. If you are ever concerned that your dog is experiencing bloat, do not wait! Your dog needs to be evaluated by the nearest veterinarian as soon as possible. Once a bloat starts, death can follow within a few hours.

What Happens When Bloat Occurs?

When bloat occurs, the stomach begins to expand and then rotates, twisting off the blood flow to the stomach and closing off the entrance and exit from the stomach. Once the stomach is twisted, it will rapidly expand, causing immense pain, non-productive vomiting and retching, poor blood pressure, collapse and shock. Your dog’s belly will start to enlarge and will become very tight, like a drum. This is a very serious condition that may be fatal even with proper treatment. However, the key to treating bloat is prompt veterinary care. If the twisted stomach is not corrected surgically within only a couple of hours, death is likely.

As the bloat progresses, some dogs will start to pant, may retch or vomit, act restless and become uncomfortable. If signs are recognized early, before the stomach twists, occasionally a stomach tube can be passed to relieve the expansion and prevent a twist. In this situation, surgery should still be performed to secure the stomach (gastropexy) in the correct position to prevent a future twist, as your dog has already demonstrated a predisposition to bloat.

How Does a Veterinarian Treat Bloat?

If your dog is bloating, your veterinarian will have a high suspicion after completing a physical exam. This is a painful condition, so an IV catheter will be placed and IV pain medication given. An X-ray will confirm a twisted stomach. The pressure from the severely enlarged stomach decreases blood circulation. Some veterinarians will give an injection of lidocaineA synthetic compound used as a local anesthetic, e.g., for dental surgery, and in treating abnormal heart rhythms. to offset any cardiac arrhythmiasA condition in which the heart beats with an irregular or abnormal rhythm., and then trocharizationThe decompression of gas from a distended intestinal viscous. is performed. Trocharization entails preparing a small area on the left side of the abdomen and then inserting a large needle directly into the stomach to allow an avenue for air to escape. Trocharization is done to provide brief relief and improve circulation while preparing for surgery. Trocharization can sometimes allow for easier passage of a stomach tube in an anesthetized patient. The stomach tube is typically left in place until the stomach is returned to the correct position.

Post-surgical complications can include irregular heart rhythm, blood clotting abnormalities and additional necrosis (death) of portions of the stomach wall that were not obvious at the time of the surgery. Some pets will die post-operation despite aggressive medical and surgical intervention. Typically, pets remain in the hospital for one to three days following surgery.

What Causes Bloat in Dogs?

Certain risk factors can make bloat more common in some dogs. These risk factors include breed (large, deep-chested breeds), feeding only one large meal a day (instead of two or three smaller portions), eating rapidly, being thin or underweight, fearful or anxious temperament and age, as older dogs (seven to 12 years) are the highest-risk group. Some owners of large and giant breed dogs are electing a prophylactic gastropexy when their dog is spayed or neutered. A gastropexy can also be done at the time of any abdominal surgery. A prophylactic (preventative) gastropexy is the same surgical procedure performed when a pet is experiencing a bloat, but it is done while the stomach is in the normal position to prevent a bloat in the future. This is the only true way to prevent a GDV.

A similar, although not as serious, condition is called “food bloat.” When a food bloat occurs, the stomach becomes severely distended with food. Outward symptoms are identical to a GDV, so an X-ray is needed to differentiate between the two. Treatment for a food bloat entails removal of the food from the GI tract and rarely requires surgery.

This is another disorder involving severe distention of the stomach, but the stomach is not twisted. However, gastric dilation easily and typically does result in a twist (called “torsion”) occurring. An X-ray is also needed to differentiate this from a food bloat and GDV. Usually a stomach tube is placed and pressure relieved. A recommendation is usually still made to perform a gastropexy, a surgical procedure to secure the stomach to the right side of the body permanently to prevent a torsion.