Brumation in Turtles and Tortoises 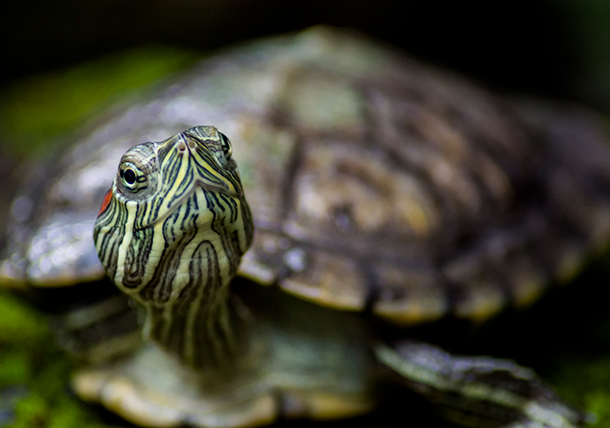 Brumation is the appropriate term used for the period of dormancy that most commonly occurs in reptiles in the colder months. True hibernation, which involves a similar process, is reserved for endoderms (warm-blooded animals). During brumation, many animals will stop eating, bury themselves and may or may not intermittently wake to drink. This process is commonly practiced by temperate species (i.e., most box turtles species) and is necessary for reproductive health.1

When Does Brumation Occur?

Brumation can be dangerous. If a turtle/tortoise undergoes brumation outdoors, it is at the mercy of the environment. If the temperature is too low, this can result in detrimental effects such as freezing. Too high a temperature also can result in negative effects such as upregulation of the metabolism, resulting in slow starvation. It is not uncommon for turtles/tortoises (especially box turtles in Texas) to fall prey to predators such as dogs, fox, racoon and rodents during brumation/hibernation.

Turtles and tortoises should be spending the summer months gaining weight and preparing nutritionally for brumation, especially with foods high in vitamin A. During brumation, turtles may lose six to seven percent of their body weight. Any body weight losses greater than seven percent may be indicative of disease.3 Turtles that show evidence of illness or are immature (less than four years of age) should not undergo brumation and rather be housed indoors with artificial lighting and heating. Brumation can be dangerous and should only be done by an experienced caretaker or veterinarian.

How To Prepare Pet Tortoises/Turtles for Brumation

Discuss the individual brumation requirements of your specific turtle/tortoise species with your exotic veterinarian. Once a turtle/tortoise noticeably starts eating less during fall, food should be withheld for one to three weeks depending on size. Water should be available for soaking and drinking. Withholding food allows for clearance of the gastrointestinal tract. During the weeks allowing for gastrointestinal clearance, temperature should be maintained between 70 to 80 degrees Fahrenheit, after which all heat sources are removed and turtle/tortoise is maintained at room temperature for one week before entering into brumation environment.2 If brumation occurs indoors, an environment with appropriate humidity (to maintain hydration), substrate (for burrowing) and temperature (35 to 50 degrees Fahrenheit) should be established. Outdoor brumation is at the mercy of the environment regarding temperature regulation, but appropriate substrate to allow burrowing should be made available in an area not prone to flooding. Turtles and tortoises also can be gently woken up every two to four weeks to monitor weight and allow for soaking to prevent dehydration. If body weight has decreased by more than seven percent, brumation should be halted immediately and veterinary care sought out.

Sometime during the months of March and April, turtles/tortoises can be removed from brumation environments or may naturally awaken if kept outdoors when the temperature stabilizes. Smaller specimens should not hibernate for any longer than 10 weeks. Large specimens should go no longer than 14 weeks.3 Warming and soaking can be initiated with a return to eating occurring generally one to two weeks after cessation of brumation.

Brumation can be very dangerous, resulting in death if not performed correctly, but is often necessary to the health of both captive and wild turtles/tortoises. Please discuss with your exotic veterinarian if brumation is required by your species and for additional advice regarding the process. Many exotic veterinarians may provide brumation services to their clients.