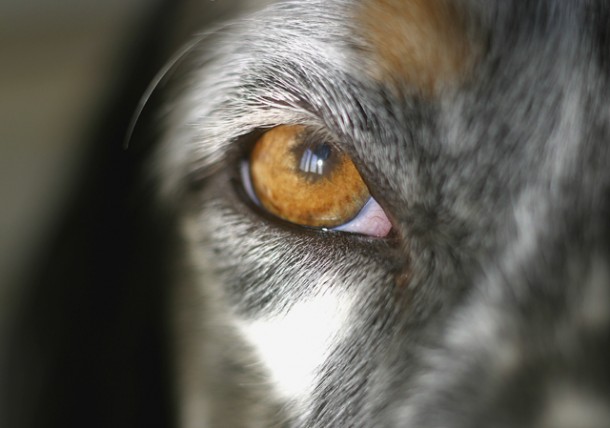 Domestic animals do not seem to react to colored objects the way people do, and it has often been thought that they do not have color vision. Dogs can’t seem to tell red balls from blue ones unless there is a size or texture difference. Even scientific studies on canine color vision show varied results; some show they see color, and some don’t.1, 2 What do we know?

Dogs’ eyes contain two types of receptors for light impulses: rods (which function for black and white and in low light) and cones (which are responsible for color vision). The dog eye contains cones, so it is logical to assume they are associated with color vision. Only recently have scientists found the real answer to the question.

A comparison between the con-to-rod ratio of human eyes and dog eyes shows that humans have approximately one cone for every nine rods, while dogs have a ratio of about one cone for every 20 rods.3 This suggests that color vision is not highly significant. In addition, cones have different types of photopigments that affect which specific colors can be visualized. Here, too, dogs differ from humans. Dogs visualize the color spectrum much as a person who is red-green colorblind. They see colors in the bluish and yellowish ends of the light spectrum, but the reds will appear grayish instead.

It is important to put this into perspective relative to the behaviors that are normal for carnivores. While the domestic dog does not have to hunt for food unless it is feral, the wolf ancestor of the dog does. Prey species are usually well camouflaged with their surroundings, so color vision is not important to a predator. However, being able to spot prey movement and differences in brightness or form would be significant. Even though the dog has been domesticated for thousands of years, the changing the visual system to be more human-like has not been particularly important. Besides, who needs color vision when the sense of smell is so highly developed?

Bonnie Beaver, DVM, DACVB, is graduate of the University of Minnesota College of Veterinary Medicine who lives in College Station, Texas. Dr. Beaver is a professor in the Department of Small Animal Clinical Sciences at Texas A&M University.