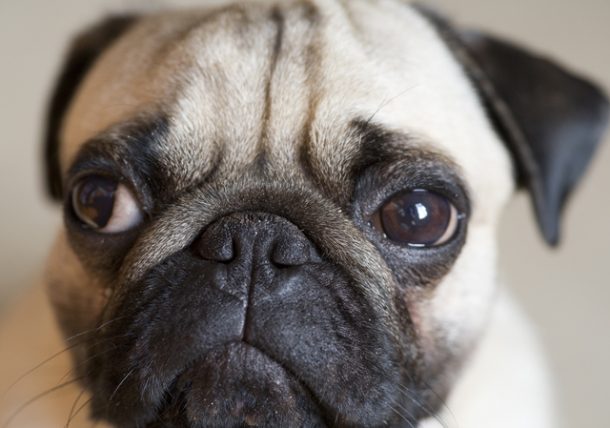 Pancreatitis refers to inflammation of the pancreas and is a relatively frequent occurrence in dogs. The pancreas is an organ located in the abdomen that sits next to the stomach and small intestine. The pancreas is responsible for secreting enzymes to help dogs digest their food and break down sugar for use as energy. Sometimes the pancreas becomes inflamed, leading to the clinical syndrome of pancreatitis.

Classically, dogs with pancreatitis vomit and have significant belly pain. They usually stop eating and often run a fever and act lethargic. Some dogs will attempt to relieve their abdominal pain by adopting an unusual posture, known as the prayer position, in which their hindquarters are raised in the air with their head and chest on the ground and their front legs extended in front of them. This position is not unique to pancreatitis but does indicate significant pain in the abdomen. Occasionally, other signs such as difficulty breathing due to fluid around the lungs, jaundice or diarrhea are present.

The most common scenario in which a dog develops pancreatitis is after eating a relatively high-fat meal, such as barbecue meat or a holiday ham. The clinical symptoms typically begin within the next 12 to 24 hours.

Other causes include certain drugs, trauma and, rarely, cancer. On occasion, pancreatitis is induced as a secondary problem from other diseases. For example, a dog that has eaten a tennis ball that has gotten stuck in its intestines may develop pancreatitis in addition to the bowel obstruction; however, the tennis ball is the primary problem.

Any breed of dog can develop pancreatitis. However, the Miniature Schnauzer and Yorkshire Terrier are known to have an increased risk of this condition.

There is no one test that can diagnose the cause of pancreatitis. Most of the time, accurate diagnosis requires consideration of the symptoms, breed, recent meals and evaluation of laboratory tests such as the following:

Treatment of pancreatitis varies based on the severity of the clinical signs. Some or all of the below treatments may be indicated:

Cases of pancreatitis may be mild or severe. They may also be acute, meaning they come on suddenly and resolve completely with treatment. Other cases are chronic, meaning they always have some low level of inflammation in the pancreas even after symptoms recede.

Some cases require easy outpatient therapy, while other cases require intensive hospitalization for many days. Most cases of pancreatitis will resolve with treatment, but there are some cases that develop severe complications or have such severe pancreatitis that dogs do not recover. Once a patient has recovered from pancreatitis, they likely remain at increased risk of developing it again in the future.