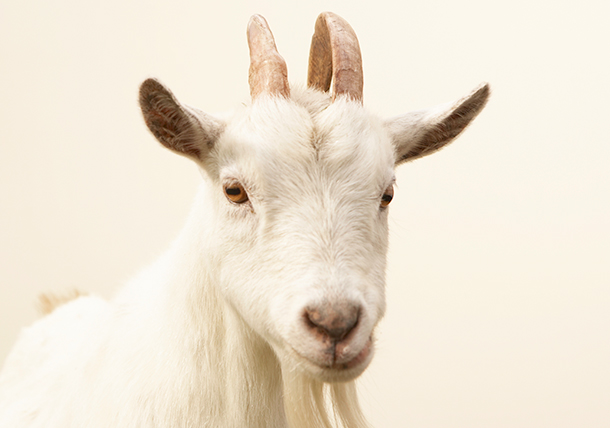 Caseous lymphadenitis (CL) is a bacterial infection found mostly in sheep and goats, though other species such as horses, cows, camelids, pigs, fowl and people can be infected. CL is caused by Corynebacterium pseudotuberculosis. While its prevalence varies by region, CL is found worldwide.

An animal becomes infected with CL via environmental contamination. The bacteria penetrate the skin or mucus membranes, usually through an injury from shearing, tagging, tail docking or castration. Animals also can become infected through contact with pus from the open draining lesions of other animals or through inhalation or ingestion of the bacteria. The incubation period for CL is one to three months.

Clinical Signs in Goats and Sheep

CL takes two forms, external and internal. The external form is most commonly found in goats and presents as abscessesA confined pocket of pus that collects in tissues, organs, or spaces inside the body of the peripheral lymph nodes. Owners will notice large, non-painful swellings under the jaw and/or armpits, in front of the shoulders and on the back of the hind legs. The abscesses contain a large amount of pus that doesn’t have an odor. The pus can be soft and pasty or caseous (cheese-like). The abscesses will rupture, drain and then heal. Goats infected with the external form of CL will have repeat bouts of abscess formation and rupture.

Impact of CL on Animals and Producers

Both forms of CL lead to significant economic loss for small ruminant producers as affected animals are usually culled from the herd. Animals with actively draining abscesses cannot be sold commercially and, once culled, typically have hide, wool or carcass loss at slaughter. Depending on the extent of disease, a carcass may be trimmed or could be condemned entirely. Animals who are not culled can die, and owners with known infected herds experience decreased sales of their animals.

CL is most often diagnosed based on clinical signs, but definitive diagnosis requires culture from an intact abscess. The internal form is harder to diagnose because the abscesses are not visible. X-rays or ultrasound are used to visualize the internal abscesses. A sample from a wash of the upper airway in animals exhibiting respiratory signs is often helpful in diagnosing CL as well. It is also important to rule out other disease processes that mimic CL, like intestinal parasites, Johne’scontagious, chronic and sometimes fatal infection that primarily affects the small intestine of ruminants and poor dentitionthe arrangement or condition of the teeth in a particular species or individual. Blood titers are available but can be difficult to interpret as they cannot differentiate between past infection, recent exposure or vaccination and active disease.

Once an animal or herd has been diagnosed with CL, strict biosecurity is the most important means of containing the disease. The bacteria that causes CL is extremely difficult to kill and can persist in the environment for two to three months. In the presence of moisture, shade and organic debris like hay or manure, the bacteria can live even longer, so rake up any bedding, loose feed/hay and waste and burn it. Infected animals should be immediately isolated and then culled once their wounds stop draining and heal. Abscesses can be lanced and flushed, but it is important to contain and dispose of all pus removed from the wounds. The abscesses also can be surgically removed intact and disposed of appropriately. Antibiotics (either systemic or intralesional) are available, but treatment for CL is considered extra-label use. Producers must be aware that withdrawal times may be different than when these antibiotics are used to treat other diseases. After the affected animals have been culled, disinfect any contaminated troughs, water buckets and structures with chlorhexidine or bleach. Immediately dispose of or incinerate any materials used in the decontamination process.

Controlling CL in a herd is difficult at best when culling all affected animals is not a viable option. One solution is to divide the herd into “clean” and “infected” groups, adhering to strict biosecurity practices when moving between the two groups and ensuring the two groups are housed far enough away from each other to prevent spread of disease from one to the other. The use of vaccination and other control measures previously mentioned also help minimize spread throughout the herd.

Use and Effectiveness of Vaccine

There is a vaccine available, but the goal of vaccinating is to reduce the prevalence/incidence of disease in an already infected herd. The vaccine will not clear CL from infected animals and is not recommended for use in herds that have not previously been diagnosed with CL. Though there are several treatments for CL, none of them are curative and recurrence occurs with all the available treatment methods.

Since CL cannot be cleared from a herd once it has been diagnosed, prevention is key in maintaining herd viability. Strict biosecurity practices should be in place at all times. Any replacement animals should be tested and isolated for a period of two to three months prior to introduction to the rest of the herd. When shearing or clipping, blades should be thoroughly disinfected with bleach or chlorhexidine in between animals, and any infected animals should be cut last. Remove potential hazards like sharp wire to minimize injuries and keep the environment free of moisture and organic debris.

Though there have been documented cases of CL transmission to people from infected goats and sheep, the incidence is rare. Wear gloves when handling affected animals and avoid direct contact with any abscess drainage. Employ good hand-washing and other preventative/decontamination measures to prevent human infection.

Caseous lymphadentitis can be a devastating disease to small ruminants, but with proper prevention and careful management, producers can make big strides in keeping their herds healthy and disease-free.