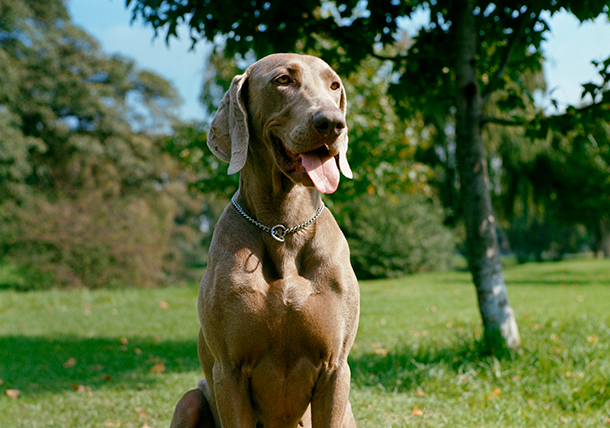 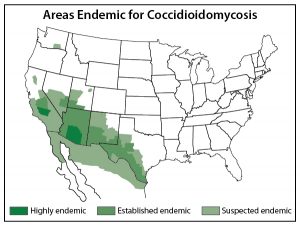 Coccidioidomycosis (CM), also known as Desert Fever and San Joaquin Valley Fever, can be a frustrating disease to diagnose and treat. It is commonly seen in dogs, primarily in the endemic areas of the southwestern U.S. and other countries like Mexico and South America. In Texas, the endemic areas are generally the western half of our state (see map). A potentially confusing element of this disease is the victim does not have to live in the endemic area but may only have to visit for a short time to become infected. Because of this, it is important for the veterinarian to get a good travel history for the pet.

Origin of the Disease

This fungal disease flourishes in dry soils, beginning in a vegetative-type stage that fragments into spores, which can be inhaled into the lungs or introduced into a wound and become the larger spherules in tissue. This form can release smaller endospores that can grow into spherules, completing the maturation cycle.

Transmission of the Disease

Historically, humans developed a skin condition known as wool-sorter’s disease from sheep and goat shearing businesses in these endemic areas. Laborers accidentally inoculated themselves during the shearing process with the spores that contaminated the sheep or goat hair. Such inoculations from trauma certainly can happen with animals as well.

Most commonly, both humans and animals are exposed from the inhalation of infective spores. Fortunately, most people and animals that have normal immune systems will not develop the disease. For those that have low immune systems, the organism may remain in the pulmonary systema series of organs responsible for taking in oxygen and expelling carbon dioxide or spread from there to anywhere in the body. A very common extra-pulmonary site seen in dogs is the skeletal system, especially the long bones.

In the bone, the spherules create lesions that are both destructive and proliferative. On X-rays, these bony lesions can easily be mistaken for cancer, bacterial or traumatic lesions or even other fungal infections. Less commonly, the disease manifests in cardiac, neurologic or ocularof or connected with the eyes or vision lesions. 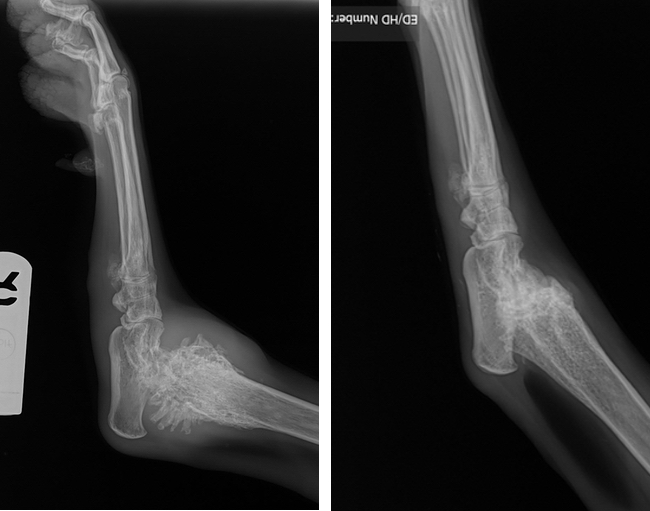 Pre- and post-treatment of bony lesions

Clinical signs are dependent upon the infection site. Common signs include chronic coughing, weight loss and difficulty breathing from pulmonary and cardiac forms, and mild to severe lameness from long bone infections. Nervous system signs may include seizures and ocular problems such as uveitis and blindness. The wide variety of clinical signs and the questionable exposure to the causative agent make diagnosis very difficult.

Diagnosis is usually made with a biopsy of infective tissue lesions and blood tests known as titers. Such titers’ significance should be determined by the particular laboratory performing the test. Rising or falling titers can be directly indicative of the level of the disease’s treatment success.

Treatment typically utilizes oral drugs of the azole class: imidazole, ketoconazole and fluconazole. Many practitioners will prescribe a daily dose of 10 milligrams per kilogram for any of these three azole drugs. Interestingly, some practitioners have seen an improved response if they change to one of the other drugs in that class. Treatment duration may be months to years. Many animals can never be totally cured and should be considered only in remission. Therefore, close monitoring throughout the life of the patient is necessary using both clinical signs and bloodwork to determine the need for further treatment.