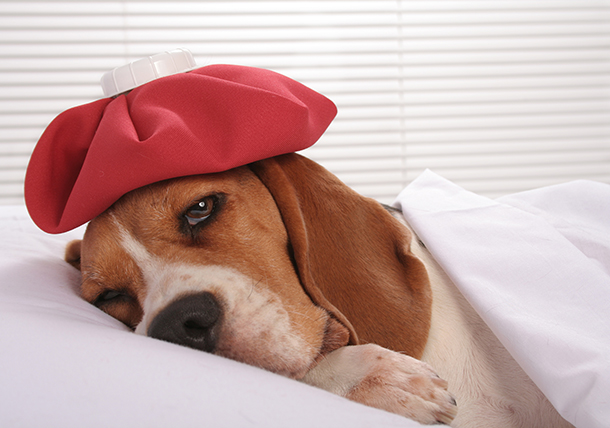 Our canine friends are susceptible to a number of toxins found around the home, and some are more dangerous than others. Those that affect the kidneys are some of the most serious because kidneys are vital to health and difficult to repair. All of the following kidney toxins must be ingested to cause illness. Below is a list of the most common kidney toxins your dog is likely to encounter, the signs of toxicity and treatments for kidney issues.

Non-steroidal anti-inflammatories (NSAIDs) such as ibuprofen (Advil, Motrin, etc.) are likely the most common kidney toxins found around the house. Human NSAIDs are toxic to dogs because they are not formulated for their physiology and can cause harm even in small doses. However, should your undiscerning dog get into the bottle of NSAIDs, the overdose can cause severe to irreversible damage to the kidneys. Additionally, NSAIDs formulated for dogs also are toxic to the kidneys when overdosed. Worse still, most of them are flavored to make them more palatable, thus also more enticing for the dog to ingest large quantities. Therefore, always keep your NSAIDs (human and canine) and all other over-the-counter (OTC) and prescription drugs on a high shelf inaccessible to your pets.

Grapes and raisins are two fruits that can poison your dog. We have yet to fully understand how grapes and raisins can cause kidney damage, but we have sufficient evidence to know there is a correlation. There is not a specific known dose of grapes or raisins that will reliably cause issues. Some dogs eat whole bags without issue, whereas others eat one or two and become gravely ill. Either way, as with all toxins, prevention is best: Do not allow your dog access to grapes or raisins. However, if your dog is keen on sharing your food with you, there are many other solid options for sharing, such as carrots and green beans.

Ethylene glycol (antifreeze) is used both to prevent freezing and overheating of automotive engines. Pets can be exposed to it either from a car radiator leak or when car fluids are being drained or changed at home. Historically, antifreeze was sweet, so our undiscerning canine friends would happily lick the substance. Fortunately, newer generations of the chemical are far less appetizing, but that doesn’t mean the chemical is any less dangerous. Antifreeze breaks down to a crystal in the kidney, causing irreversible damage and failure if not treated in time. Dogs exposed to antifreeze have less than 12 hours before the damage becomes permanent and untreatable.

For all of the above toxins, the clinical signs of acute kidney failure are usually the same: severe lethargy, vomiting, loss of appetite, inappetence/anorexia, hypothermia, severe halitosis (bad breath), drooling, tremors/twitching or seizures. Some animals will exhibit markedly increased thirst prior to the onset of vomiting. If your dog exhibits any of the above signs, bring him to your veterinarian immediately.

The good news is that if caught early enough, all of the above toxins are treatable with good long-term prognoses. If you suspect your dog has ingested any of the above substances, call your veterinarian immediately because it is an emergency!

Usually, your veterinarian will have your dog vomit the offending substance if it was within a certain timeframe. Additional treatments may include activated charcoal, IV fluids, hospitalization, anti-nausea medications and urine monitoring depending on the dose and timing of ingestion. If your dog is suspected of ingesting antifreeze, there is a specific antidote she will need during the first 12 hours after ingestion.

If your dog experiences kidney failure, your options become limited and are often costly. Do not hesitate to call your veterinarian if you suspect your dog has ingested any of the aforementioned toxins or you notice your dog showing any of the signs listed above.