Ebola: Are Our Pets at Risk? 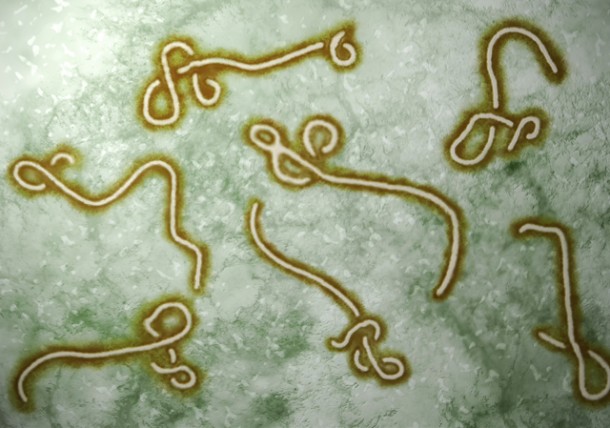 For the past several months, countries in West Africa (Guinea, Liberia, Sierra Leone, Nigeria and the Democratic Republic of Congo) have been experiencing an outbreak of illness caused by the Ebola virus. People infected with this virus usually show the following symptoms: fever, headache, muscle pain, weakness, vomiting and diarrhea, followed by dysenteryInfection of the intestines resulting in severe diarrhea with the presence of blood and mucus in the feces. or blood in the diarrhea and abdominal pain. Though some people who have the illness do recover, many of the patients die. Some outbreaks of Ebola have seen fatality rates as high as 90 percent. There is currently no cure or approved treatment for the disease. Medical intervention focuses on supportive care, such as rehydration and treatment for secondary infections.

How is Ebola transmitted?

The source of the virus in nature has not been definitely identified; however, wild animals, specifically bats, are suspected of harboring the virus. In West Africa, people often eat “bushmeat,” which is the flesh of wild animals, such as bats, which they kill and consume, just as hunters kill and consume deer and other wildlife in the U.S. Contact with the animal while killing, skinning and preparing it can result in the humans being infected with the virus.

Acquiring the virus from bushmeat is an example of “zoonotic transmission,” meaning the virus is transmitted from animal to human. However, the more current outbreaks are a result of human-to-human transmission. People who are ill have the virus in their body fluids, including their blood, urine, vomit, feces and saliva. If family, friends, doctors or other healthcare workers come into contact with these fluids, they can become infected. Objects that come into contact with any infected fluids also serve as a source of infection if they are not properly decontaminated. Fortunately, the virus is not transmitted through the air like the flu or tuberculosis.

In order to prevent transmission of the virus to other people, it is important to recognize the disease in a patient as soon as possible so the patient can be isolated for treatment. It is also important for all healthcare workers or other people who interact with the patient to wear personal protective equipment (PPE) such as a face shield, gown, gloves and goggles to prevent contact with the patient’s bodily fluids. Of course, thorough disinfection of all equipment used for the patient is mandatory.

Another step in the prevention process is to identify all people who had contact with the patient after the first symptoms started and monitor their health status for the maximum incubation period of 21 days. If any contact begins to experience symptoms, he or she can immediately be isolated and treatment begun.

Is the Ebola virus a threat to Texans?

Though the virus is causing devastating outbreaks in West Africa and it is easily transmitted via patients’ bodily fluids, the potential for a large outbreak in the United States is small. That being said, because the incubation period can be as long as 21 days and no symptoms are observed that time, it is not out of the realm of possibility that someone from a West African country who did not know he or she was infected could travel to the U.S. and begin experiencing symptoms while here.

If the person seeks medical care and mentions his or her connection to West Africa, the doctor will likely suspect Ebola and isolate the person for treatment and to prevent the spread of the virus. Additionally, the doctor would notify the public health authorities. Public health officials would trace and interview all patient contacts so they can be educated and their health status monitored. This rapid response can serve to prevent or minimize the spread of the disease.

We in the U.S. are very fortunate to have a strong medical system, the resources for excellent patient isolation and treatment, readily available and abundant PPE and well-prepared public health systems. This decreases our susceptibility to an Ebola outbreak.

So, are our pets susceptible to this disease, too?

The truth is that very little research has been devoted to whether dogs or cats can become infected with Ebola. At least one study has indicated that dogs can become infected with the virus; however, there is no evidence that they actually become ill. They just show a response to viral infection through the production of antibodies in their blood. There have been no studies or reports that indicate that an infected dog can transmit the virus to its owner. We have seen no published studies about cats and whether they can become infected. Though evidence shows infection may be possible in our pets, it is highly unlikely and shouldn’t be a cause for worry. Until more studies are pursued about Ebola and its risk of infection in pets, we will have to take a “wait and see” position.

More information about Ebola can be found at:

The U.S. Centers for Disease Control and Prevention

The World Health Organization
The New England Journal of Medicine