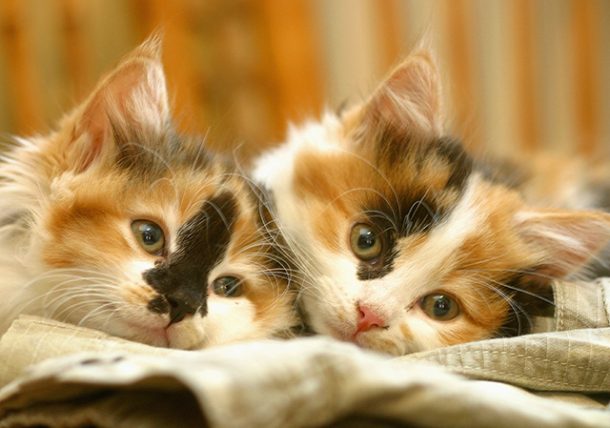 Classically, cats with asthma develop a cough. A cough in cats may be difficult to recognize, as they often appear to be trying to vomit or cough up a hairball. Cats that repeatedly stretch their necks out and make a retching noise but that never produce a hairball are likely to be coughing.

Cats also may present with difficulty breathing. Cats that have trouble breathing may show only subtle signs of distress. The number of times they breathe in a minute will increase, and their breaths will be shallower. They may have a noticeable abdominal component to their breathing in which the belly, rather than the chest, helps to push the air out of the lungs. Cats with severe difficulty breathing will breathe with an open mouth.

There is no one diagnostic test for asthma, so typically a combination of diagnostic tests and evaluation of the physical clinical signs will be required to diagnose asthma.

As long as the pet is stable, if a cat is suspected of having asthma, radiographs (X-rays) are usually obtained. Inflammation of the small airways in the lungs is characterized by the walls of the airways thickening, which constricts the passage of air and creates a distinct appearance on X-rays. When viewed head-on, the thickened airways are called “donuts,” and when viewed from the side, the airways are referred to as “tramlines.” Because cats with asthma cannot exhale in a normal fashion, air becomes trapped in the smallest airways in the lungs, causing them to overinflate (air trapping). In the X-rays, the lungs may appear larger than usual, and the diaphragm may appear flattened. Some cats with asthma, especially if it is a recent development, can have normal chest X-rays.

Bloodwork may be completely normal in a cat with asthma. However, sometimes the white blood cells that are associated with an allergic or parasitic response (known as eosinophils) may be increased in cats with asthma. Other blood tests may be recommended to help rule out other causes of respiratory disease in cats.

Procedures to obtain cells within the airways in the lungs are sometimes recommended when asthma is suspected. These techniques, known as a transtracheal wash or bronchoalveolar lavage, can help confirm the diagnosis of asthma and exclude other possible causes of the clinical signs.

Cats that present in a crisis state of difficulty breathing are often administered oxygen by a mask, a small tube that delivers it to the nose or in an oxygen cage. Because the disease consists of inflammation that leads to airway constriction, treatment is then aimed at reducing inflammation and opening up the airways.

Corticosteroids are almost always part of treatment for asthma due to their anti-inflammatory effects. Initially, if a cat is in respiratory distress, they may need corticosteroids with an injection. Once a patient is more stable, corticosteroids may be administered by long-term injection or orally. Because long-term or high-dose treatment with corticosteroids is associated with a number of undesirable side effects, tapering the dose to the lowest necessary amount to control the inflammation is recommended.

Another way to reduce corticosteroid side effects is to administer them by inhalation. Just as in people with asthma, metered dose inhalers are available to help control airway inflammation. Many cats will tolerate treatment with an inhaler if a special adapter for cats is used (Aerokat). Delivering the medication directly to the lungs minimizes the side effects for the rest of the body.

Most cats will need at least some corticosteroids for the rest of their lives. A few patients may have acceptable responses to intermittent or seasonal administration of such medications. If a cat cannot take corticosteroids due to another co-existing disease, other immune-suppressing drugs such as cyclosporine may be tried.

Bronchodilators are medications that open up the airways. They are available in oral, injectable and inhaled forms and may be required to reduce the clinical signs of asthma in some cats. Since they do not treat the underlying inflammation of the airways, they are usually combined with corticosteroids.

Newer medications that act on chemicals in the lungs called leukotrienes (e.g., Accolate, Singulair) have been used in some cats. Although they have great promise and are widely used in human asthma treatment, their use in cats is still not well-studied.

The inflammation of the lungs that characterizes asthma is caused by an overactive immune response or allergy in many patients. Preventing the external triggers that lead to this inflammation can help avoid many clinical signs. Cats with asthma should not be around smoke of any kind, particularly tobacco smoke. The use of aerosol sprays can trigger an asthma attack in some patients so that should be avoided as well. Cat litter should be dust-free and changed regularly to reduce ammonia odors. Frequent changes of air filters and using special filters designed for human asthma patients also can be considered.

Asthma can result in a respiratory crisis and death if left untreated. Difficulty breathing or open mouth breathing in a cat should prompt an immediate trip to the veterinarian for evaluation and treatment. However, once stabilized, many cats with asthma live a long and reasonably symptom-free life on asthma medications.

A Note About Other Species

Asthma in cats is very similar to asthma in humans. Although many medications are the same, please consult your veterinarian before you administer any medications to your cat, as some may be harmful.

Dogs are not typically diagnosed with asthma but are commonly affected by a similar syndrome known as chronic bronchitis.