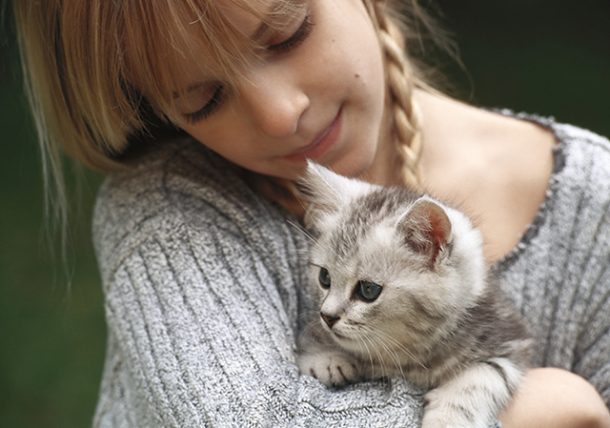 Pancreatitis refers to an inflammation of the pancreas. The pancreas, an organ situated in the abdomen near the stomach, is responsible for secreting enzymes that help pets digest food.

Cats that suffer from pancreatitis have non-specific clinical signs. They often have abdominal pain, which may cause a decreased appetite, intermittent vomiting and decreased activity. In many cases, cats may hide more and interact with the family less but have no specific signs to indicate the problem. Weight loss is common in cats that have had undiagnosed pancreatitis for a while.

Age and Additional Health Problems Play a Role in Pancreatitis

Cats of any age can develop pancreatitis. However, it is more common in middle-age to older pets. Sometimes pancreatitis occurs in conjunction with other diseases. Many cats with pancreatitis are also diagnosed with inflammatory bowel disease, causing weight loss and gastrointestinal signs. Other cats have cholangiohepatitis, an inflammation of the liver and gall bladder. Cats who have all three syndromes are said to have triaditis.

Pancreatitis and diabetes mellitus sometimes occur concurrently. Diabetes causes an inability to properly regulate blood sugar and may occur when pancreatitis damages the ability of the pancreas to produce the hormone insulin. Both diabetes and pancreatitis must be addressed in affected patients.

Pancreatitis is difficult to diagnose in cats as there is no one test that will consistently diagnose it. Your veterinarian may conduct several tests to determine what is wrong. These tests may include:

Complete Blood Panel: This test may indicate an elevated white blood cell count or show no changes. An elevated white blood cell count is common with many types of illnesses in cats and indicates the presence of infection or inflammation somewhere in the body. In some cases, cats with pancreatitis are mildly anemic, meaning they have fewer than normal red blood cells. Anemia is a common indicator of many chronic feline diseases.

Chemistry Panel: Although there is no specific test for pancreatitis on this panel, cats with co-existing diseases such as liver disease or gall bladder disease may have elevated enzymes associated with those organs. There often are indications of dehydration in cats with pancreatitis because they may be vomiting or not be drinking well. In rare cases, cats with pancreatitis may have difficulty regulating their blood sugar and become diabetic. The values on this panel will help your veterinarian determine if that is occurring.

SPEC-FPL or fPLI: These are blood tests that identify the presence of a pancreatic enzyme that is indicative of inflammation in the pancreas. An in-house version may yield a positive or negative result while a test sent to a reference laboratory will provide a number that can be used to diagnose and monitor pancreatitis. These tests are sensitive to inflammation of the pancreas, and occasionally a cat with no signs of disease may test positive. This may indicate the presence of low levels of inflammation in the pancreas or that there is a disease in the intestines that may be affecting the pancreas. Your veterinarian will help decide whether any treatment is necessary based on your pet’s history and physical exam results.

X-rays: The pancreas is rarely visible on X-rays of a cat’s belly, but it may be seen if it is abnormal. However, it is common to have completely normal abdominal X-rays even with significant pancreatitis.

Ultrasound: Ultrasound is an excellent way to view your cat’s abdomen and may be used to identify disease in nearby organs such as the liver, gall bladder or intestines. Not all cats with pancreatitis have ultrasonographically visible changes in their pancreas, but for those that do, it is a useful test to identify and evaluate the seriousness of their disease. Not all ultrasound machines are capable of showing the feline pancreas, and not all veterinarians are trained to use ultrasound. Some veterinarians depend on diagnosing pancreatitis in alternative ways, while others may refer you to a veterinarian with experience using ultrasound.

There is no single way to treat feline pancreatitis, and every case is different. The basic goals of treatment are reducing pain and nausea and eliminating the chemicals in the body that contribute to inflammation of the pancreas. Often this is accomplished by giving cats medications for pain and nausea and administering fluid therapy. Cats that are very ill may require IV fluids, injectable medications and a stay in the hospital for several days. Cats with less severe pancreatitis may get their fluids under the skin (subcutaneously) and receive home care with regular follow-up visits with their veterinarian.

Besides treating the pancreatitis, other conditions must be treated simultaneously. If there is an underlying liver or gall bladder disease, medications such as antibiotics and liver protectants may be used. Disease in the intestines may require corticosteroids to reduce inflammation in the intestines. If the cat’s ability to regulate blood sugar is affected, medicine such as insulin may be needed, at least temporarily. Different diets and probiotics to improve the environment within the gastrointestinal tract often are a part of effective therapy.

Many cats are treated effectively for their pancreatitis. However, there are a few cats that develop serious complications from it. Because of the potentially severe inflammation, sometimes pancreatitis can lead to problems elsewhere in the body such as the lungs or brain. A rare but serious complication called disseminated intravascular coagulation (DIC) leads to bleeding problems throughout the body and is difficult to treat. A few cats that stop eating due to pancreatitis will develop fatty liver disease (hepatic lipidosis), which may require a temporary feeding tube.

Because of the variable nature of pancreatitis in cats, the long-term prognosis varies considerably. Some cats will suffer a bout of acute pancreatitis, be effectively treated and experience no long-term effects. Others may have a more chronic pancreatitis with waxing and waning clinical signs that may require medication and attention to diet, preventing long-term complications and a need for repeat hospitalizations. Those cats that have other diseases concurrently with pancreatitis will need effective management for all their diseases to help prevent clinical signs from recurring.