How to Control Fleas in Your Pet 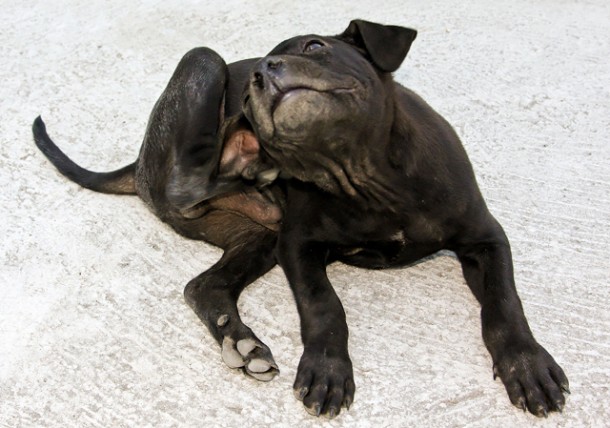 There are more than 1,900 species of fleas in the world. The one that most pet owners in the U.S. deal with is Ctenocephalides felis, the cat flea.

Although this flea is called the “cat flea,” it doesn’t mean that it limits itself to cats. This flea is not too picky when finding a host to feed on and is commonly found on both dogs and cats. While this flea can feed on human blood, people are not its main fare. It prefers the blood of other mammalian species and won’t feed on people unless no other mammals are present or in the event of severe infestations. This flea species also enjoys dining on rabbits, rodents and other mammals.

Flea burdens are generally the worst in warm, humid climates like coastal regions, even for indoor pets. However, fleas can be a problem in most regions of the country. Family pets and performance dogs with a history of exposure to open fields and wooded areas are at risk as well. It takes approximately three weeks of consistent 80-degree Fahrenheit temperatures, combined with a relative humidity of 70 to 75 percent, to stimulate egg laying and hatching. In the Midwest, life cycles routinely span 35 to 40 days during early spring and 17 to 21 days in mid-summer. By late summer, life cycles slow to two months or more and virtually shut down between November and March.

Climate influences flea survival differently at each developmental stage. Eggs and larvae are considered the most susceptible to temperature and humidity. Larvae require at least 50-percent relative humidity to survive; otherwise, they dry up. For example, in the Gulf Coast states, approximately 20 percent of eggs reach the adult stage, while in more arid regions, less than five percent make it to the adult stage. For the Texas pet owner, it is important to keep in mind that the temperature and humidity in this state are favorable for flea hatching and larval development. In the right temperature and humidity, such as your living quarters, eggs and pupae can persist for a very long time!

While fleas feed off of your pet, they also produce eggs, which then fall off the hair coat and into the surrounding environment. Eggs develop into larvae, which then spin cocoons (often within carpet fibers) for pupation. Pupae are very hardy and can withstand frosts, drying out and insecticides. Pupae can lie dormant in your home or outdoors for many months. They are stimulated to hatch from their cocoons by warmth and carbon dioxide. Once the young flea has hatched, it immediately searches for a host to ingest its first blood meal, and thus the flea life cycle begins again.

Fleas Can Cause Disease

An animal with fleas may be more sick or uncomfortable than you realize. Fleas feed on a host’s blood, which means that a high number of fleas on a patient can lead to anemia. Flea bites can also lead to the transmission of infectious disease as the flea moves from one host to another.

Due to hypersensitivity reactions, even a low number of fleas can lead to severe allergies that result in constant scratching and sores that require veterinary attention. Fleas also may harbor tapeworms, which are transmitted to animals when fleas are ingested by the pet. Tapeworms live in the gastrointestinal tract of mammals and even reptiles and birds. Tapeworm larvae have been associated with fluid build-up in the abdominal cavity, poor appetite, weight loss and even death. The adult tapeworm is commonly implicated in causing severe itching in the posterior area of household pets.

Cats and dogs aren’t the only warm-blooded mammals that fleas affect. The disease known as “cat-scratch fever” (Bartonella) is transmitted when fleas from an infected cat have contact with a cut on a person. Usually the disease doesn’t cause problems in the cat, but in some instances, it can cause a temporary fever, inflammation of the heart (endocarditis), lethargy, bone infection and weakness.

Bartonella in people commonly presents as tender, swollen lymph nodes. Lethargy, reduced appetite and body aches are reported by people who have been infected. Other complaints include headache, chills, muscular pain, joint pain, arthritis, backache and abdominal pain. In most instances, the disease resolves on its own after about a month; however, in rare situations or in those with compromised immune systems, Bartonella can cause neurologic or heart problems. Patients with a compromised immune system are susceptible to further complications, such as skin lesions extending to bone or the liver and spleen.

The rat flea, Xenopsylla cheopis, is the vector most commonly credited with spreading bubonic plague. However, this is an extremely rare condition. Numerous other flea species, including the cat flea, have been associated or directly connected to the transmission of plague.

How to Prevent Fleas in Your Pets

The good news about fleas, if there is any, is that infestation on your cat, dog or other pet is entirely preventable. There is a common misconception that flea preventatives aren’t needed if an animal is primarily indoors. The problem is that fleas enter most living quarters with ease. Doors or window screens won’t keep them at bay. Think of fleas the way you would an impolite neighbor. A flea won’t knock at your door and wait to be let in; it just finds the opportunity and enters.

All pets, whether indoors or outdoors, should be treated monthly with a veterinarian-approved flea preventative appropriate for the species (i.e., cat, dog, rabbit, ferret, rodent). There are several different products available. Your veterinarian can help you select one that’s easy for you to administer.

For animals that are allergic to fleas, even a few fleas can cause intense itching. Ongoing flea control is needed to keep these animals comfortable and symptom-free.

While in the past popular flea control strategies targeted the environment, today we are fortunate to have a number of products aimed at preventing the egg from hatching or killing the adult. A few products do both. So cleaning bedding and the area that your animals spend time on is helpful for removing eggs, larvae and pupae. The most important measure you can take is not allowing the flea population to flourish. This is accomplished by regular use of one of the newer veterinarian-approved products. Discuss with your veterinarian which product is best suited for your pet(s).

Over-the-counter sprays and shampoos are readily available; however, there are problems that can arise from inappropriate use. Talk to your veterinarian before purchasing any of these products. Many spot-on sprays and shampoos do not have long-lasting activity, and those that work are often toxic to cats and should not be used on felines or on dogs that live in close contact with cats. In most cases, there are safer alternatives available directly from your veterinarian.