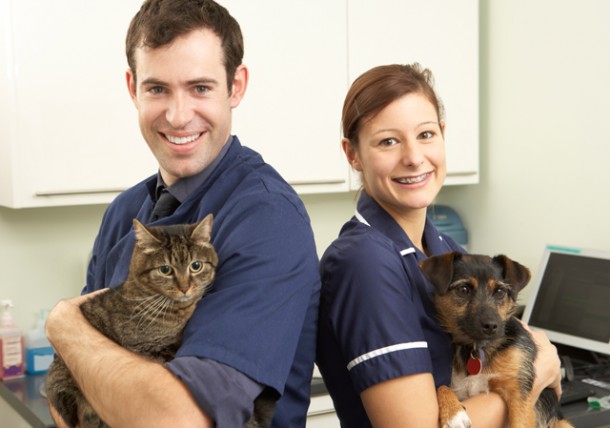 What is This Disease and What Causes it in Pets?

Heartworm disease is caused by an infection by the parasite Dirofilaria immitis (D. immitis). D. immitis is a nematode, a type of microscopic worm, that is transmitted to animals by the female mosquito. When a mosquito harboring the parasite feeds on an animal, it allows the immature parasite to enter the animal’s bloodstream. As it develops, the parasite eventually migrates to the pulmonary arteries, which are large blood vessels that connect the heart and lungs.

As the parasites mature into adult heartworms, they obstruct the normal flow of blood from the heart through the pulmonary artery to the lungs. When the number of heartworms is very large, they can spread into the heart itself.

In addition to disturbing normal bloodflow, the presence of heartworms can also cause inflammation in the pulmonary vessels and lungs. This can lead to thromboembolic disease (blood clots), elevated pulmonary blood pressure, reduced oxygenation of the lungs and body tissues, difficulty breathing and potentially death.

How is it spread?

Heartworm disease in your pet is transmitted via the bite of female mosquitoes. When a mosquito feeds on an animal already infected with heartworms in its bloodstream, the immature form of the parasite (called microfilaria) is picked up by the mosquito. These larvae then undergo maturation periods in the mosquito and develop from first-stage larvae (L1) to third-stage larvae (L3). The time for the larvae to mature from L1 to L3 is eight to 17 days.

The L3 larvae are the ones capable of transmitting disease when the mosquito feeds. Over several months, these larvae undergo two more moltsTo shed old feathers, hair, or skin, or an old shell, to make way for a new growth. (maturation) to reach the L5 stage, which migrate through the animal’s tissues and enter the pulmonary vessels. Once these worms are mature adults (approximately six to seven months), they begin to reproduce and create new microfilariaThe microfilaria is an early stage in the life cycle of certain parasitic nematodes., which may be transmitted as soon as a mosquito feeds on the animal.

While heartworms are found throughout the U.S. and all over the world, certain areas carry a higher risk of heartworm infection. High-risk areas can encompass very large regions, such as near the Atlantic and Gulf coasts and along rivers. Factors that predispose toward heartworm development are warm temperatures and high humidity, which also contribute to large reservoirs of breeding mosquitoes.

While adult heartworms typically live in the pulmonary arteries, in some cases abnormal migration causes the parasite to be found in other parts of the body. These include the right and left ventriclesA hollow part or cavity in an organ, in particular. of the heart, other blood vessels and sometimes even the tissues of the nervous system. The symptoms seen with the disease can vary depending on the location, the species infected and the severity of the infection.

The most frequent signs that are reported include a persistent cough, difficulty breathing, exercise intolerance, decreased appetite and weight loss. In more severe infections or infection in pets of non-canine species such as cats and ferrets, the symptoms may be more dramatic. Consequences of a severe infection or infection in a smaller animal can result in lung inflammation, ruptureTo break or burst suddenly. of red blood cells and ensuing anemiaA condition marked by a deficiency of red blood cells or of hemoglobin in the blood, resulting in paleness and weariness., liver and kidney failure, high or low blood pressure, shock, blood clots and heart failure.

In addition to the previous symptoms, cats may also develop asthma-like attacks or gastrointestinal signs, such as decreased interest in food, vomiting and weight loss. Occasionally pets will exhibit neurologicalCategories of conditions and disease involving the central and peripheral nervous system. signs, such as difficulty walking and/or seizures. Fluid accumulationThe acquisition or gradual gathering of something. in the abdomen and collapse may also occur. Unfortunately, the first sign of heartworms in cats is often sudden collapse or death.

Ferrets are also highly susceptible to heartworm disease. The symptoms of disease in ferrets are similar to those in dogs but may develop more quickly as a ferret’s heart is quite small. Just one worm in a ferret’s heart can cause serious breathing difficulty. Symptoms of heartworm disease in ferrets include coughing, fatigue, tiredness and open-mouthed, rapid or distressed breathing.

Testing is comprised of two parts: testing for the adult worm antigen (a foreign substance that comes from the uterus of the female worm) and also checking for the presence of immature larvae (microfilaria).

MicrofilariaThe microfilaria is an early stage in the life cycle of certain parasitic nematodes. can be found by looking at a drop of blood under a microscope. The immature worm larvae wriggle in the blood and can be detected by the trained eye. The adult heartworm will not be present until they mature, which is usually six to seven months after infection. Since standard adult heartworm tests look for the presence of antigenA toxin or other foreign substance that induces an immune response in the body, especially the production of antibodies., which comes from the uterus, females need to be present in order to detect heartworms on the most commonly run tests.

Other tests are available that look for the presence of antibodiesA blood protein produced in response to and counteracting a specific antigen. produced by the infected animal. This test may be helpful in detecting heartworm infections where only male worms are present. However, if the number of heartworms is low (less than three), both antigen and antibody tests may be unable to detect the presence of heartworm disease.

Because most testing requires an infection of greater than three worms, it can be hard to detect heartworm infections in cats and ferrets. Because of the small number and/or the single sex of the worm population found in cats and ferrets, reproduction rarely occurs (for instance, in less than 20 percent of infected cats), so microfilaria are not found.

In cats, ferrets and dogs with low numbers of heartworms, other diagnostic tests may be required. An antigen and antibody tests are recommended along with an echocardiogram (an ultrasound of the heart). The latter test can be used to detect the presence of heartworms visually, even in low numbers and is very helpful in detecting heartworms even when only a small number are present.

In pets known to have heartworm disease, radiographs (X-rays) of the chest should also be performed to evaluate changes in the size of the heart and pulmonary vessels, signs of lung inflammation and liver enlargement.

Treatment of a typical heartworm infection includes a series of deep muscle injections consisting of an arsenic-based substance that kills adult heartworms in your pet. Prior to this treatment, a pet will be started on an ivermectin-basedA compound used as a method for killing parasitic worms in veterinary medicine. heartworm preventative and may undergo a course of treatment with doxycyclineA broad-spectrum antibiotic of the tetracycline group. (which may make the worms more susceptible to the arsenic-based injections). An animal that has received the injections is prone to developing blood clots and should have his or her exercise restricted during the period of treatment. The entire course of heartworm treatment can take two to three months.

Treatment of infective microfilaria includes using an ivermectinA compound used as a method for killing parasitic worms in veterinary medicine. product to kill the larval stages L3 and L4 and some L5 larvae. This treatment needs to be done carefully as allergic-type reactions to dying larvae can be life-threatening. A steroid to reduce inflammation and associated side effects is often utilized along with an antihistamine such as Benadryl.

There are a number of products on the market today for the prevention of heartworm infection in pets. These products can be broken into two categories: the ivermectinsA compound used as a method for killing parasitic worms in veterinary medicine. and those that contain milbemycinUsed in veterinary medicine as antiparasitic agents against worms, ticks and fleas.. Together, these two products are known as macrolidesAny of a class of antibiotics containing a lactone ring., and they are designed to kill the stages of larvae that are infective.

However, if you have any concerns about your breed, please discuss it with your veterinarian. There is testing available for the genetic marker that predisposes certain breeds to drug sensitivity.