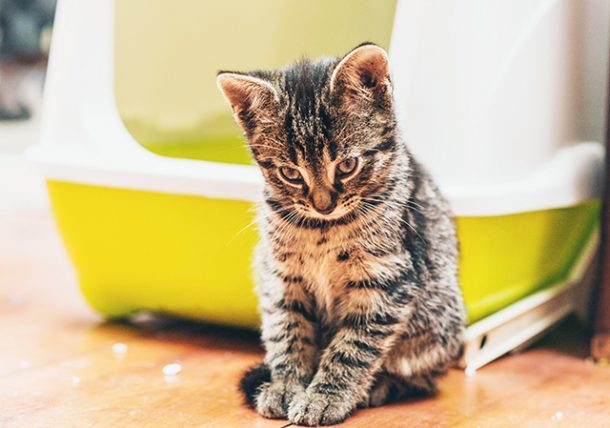 Litter box training a kitten is far simpler than potty training a child or housebreaking a puppy. All you need is a kitten, some litter and a box! The steps are straightforward. First, place your kitten in the box, allow the kitten to dig and use the box, and, lastly, scoop the box frequently.

It’s almost always simple to train a kitten to eliminate in a litter box because litter boxes contain a substrate for cats to scratch and dig—their innate method of eliminating. By providing such an outlet, you are already supporting their natural behavior. Commercially available litters are fine, and many veterinarians will agree that clay clumping unscented litters are the substrate cats prefer.

The size and shape of the litter box matters considerably. If the sides of a litter box are too high for small kittens, they will not have easy access to the box. If the sides are too low, male cats and kittens may urinate over the wall and cause a mess outside the litter box. Kittens need the freedom to turn around, position readily and dig freely in clean substrate. As the cat grows, it will require a larger litter box, typically one and a half to twice their body length.

Lids create problems for cats as they retain odors like a Port-a-Potty, and a feline’s sensitive sense of smell and propriety may prevent it from using those boxes regularly—or at all. In multi-cat homes, lidded boxes offer a single entry and exit, allowing the possibility for another housemate to stalk and/or attack the cat using the only access area. A fear of active or even passive aggression from a housemate around the litter box or owners attempting to medicate their cat while it is in the litter box may lead to litter box avoidance and, in turn, house-soiling behavior.

Location of Litter Box Is Key

The litter box should never be placed next to food or water because cats prefer not to eliminate where they eat. Ideally, it should be in a quiet place so they feel free to use it and are not stressed. For example, it should not be placed adjacent to a dryer full of soccer cleats or a screaming child’s nursery. Additionally, no matter how many litter boxes are in a room, it is still only one bathroom to a cat. When adding another litter box, put it in a different location. If a home has more than one story or is large, a litter box should be available to the kitten on all floors or in different sections of a large home to prevent accidents. Cats often prefer a bit of light when using the litter box at night. A nearby nightlight can improve litter box utilization.

Initially, the kitten should never be more than one half of a house-length away from an acceptable litter box per floor. That could mean having several extra litter boxes temporarily. The standard rule of veterinary behaviorists is to have one box per cat, plus one. It is always better to prevent inappropriate elimination (house soiling behavior) than to deal with it once it has become a habit and damaged your home.

When training, put the kitten in the box to show it where the box is and how it feels. Return the kitten to the box after meals when the urge to go is strongest. Very young kittens will get the idea quicker if you wipe their rear end with a damp, warm cloth just before placing them in the box. Most kittens will immediately take to the litter box if it is a substrate they like, they feel the urge to eliminate and/or can easily access it. Keep in mind some cats prefer one substrate for urination and another for stool.

Burying feces is a feline instinct. Not burying the stool may indicate that the substrate is not acceptable to the kitten. The odor of urine and feces that is left for another cat or predator to find is a challenge to “claim” that territory. It also alerts predators to its presence in the wild. Burying excretions avoids conflict and potential danger from predators and other cats that might share or dominate that territory. This is most relevant for outdoor cats.

Cats don’t cover eliminations at the periphery of their territory to signal to other cats that the area is already occupied. Eliminations closer to the center of the territory are buried for hygienic and sensory reasons.

Cats are fastidious and like to use a clean elimination area, so the litter box should be scooped twice daily, and the box should be dumped and cleaned with soap and water weekly. For outdoor cats, boxes full of sand in the backyard can be used with tall plants to shield cats from view. They will use these areas of elimination if they contain preferred substrates. Otherwise, they might use your neighbors’ flowerbeds! Eliminations in garden beds and children’s sandboxes can serve as a source of the spread of serious diseases to other cats and people, so practicing responsible pet ownership is crucial.

In summary, every cat should have at least two litter boxes in separate quiet areas throughout the house. A veterinarian-recommended, commercial clay clumping litter in a large accessible box with no lid is preferred, and there should be no liners for claws to get stuck in. Avoid placing litter boxes inside furniture that can trap odors and mimic covers, and be ready to take on litter box training with confidence!