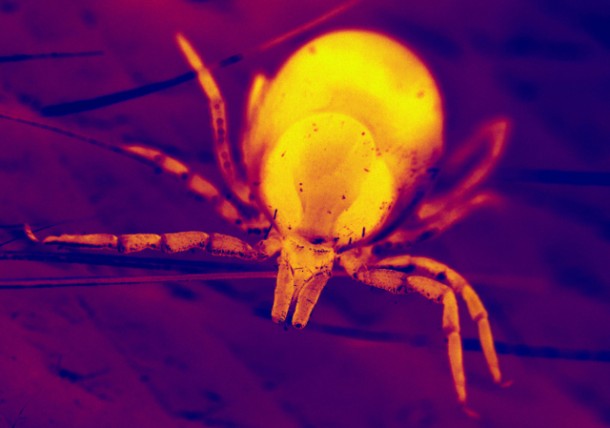 Lyme disease is a zoonotic disease that is contagious to many species of animals, including humans and dogs. Other species, such as horses and cats, may also become infected but rarely. The spirochete bacteria Borrelia Burgdorferi causes Lyme disease and is transmitted through the bite of an infected- blacklegged tick (Ixodes).

The bite of an Ixodes tick typically transmits the disease at the end of its feeding cycle, about 48 hours after attaching to the dog. Dogs do not transmit the disease to humans. Although the bacteria can be shed in bodily fluids (e.g. blood, saliva), this is not a method of transmission to humans. Typically, once an Ixodes tick feeds on a dog, the tick falls off, lays its eggs and dies without re-attaching to a new host. 1 If your dog tests positive for Lyme disease, you may be at risk because you have also been exposed to ticks in the same manner as your dog, but your dog cannot give you Lyme disease.

In dogs, Lyme disease can cause lameness secondary to inflammation in the joints (arthritis). Dogs may run a fever, have decreased appetite, act depressed, have enlarged lymph nodes and be sensitive to touch. In one to two percent of dogs with Lyme disease, the bacteria can also attack the kidneys and cause a condition known as glomerulonephritis, which is a type of kidney disease that can cause kidney failure. Lyme disease can also affect the eyes and cause conjunctivitis, uveitis, corneal edema, chorioretinitis and retinal detachment. 2Rare cardiac and neurological complications may also occur. When the ticks that transmit Lyme disease attach to humans, humans may develop a circular area of inflammation around the bite area called a ‘target lesion’. This skin lesion is not frequently seen in dogs.

There is a canine vaccine for Lyme disease. Generally, the Lyme disease vaccine is not considered a ‘core’ vaccine like the Parvovirus vaccine, which means it is not routinely given in areas where Lyme disease is not endemic. Your veterinarian may recommend the vaccination if you live in or travel to areas endemic for Lyme disease. A better way to protect your dog from Lyme disease is to strictly monitor your pet’s exposure to all external parasites. Regular use of a tick preventative and regular tick checks after spending time outdoors are key to prevention. Ask your veterinarian which tick control product they recommend in your area. If you see a tick on your pet, safely remove it as soon as possible. Do not try to smother the tick or burn it with a match because these techniques can cause the tick to regurgitate infectious organisms into your dog. The Centers for Disease Control and Prevention provides instructions on how to safely remove ticks at http://www.cdc.gov/lyme/removal/index.html.

The Ixodes tick that transmits Lyme disease exists in Texas, so both humans and animals can become infected in this state even though the infection is more commonly found in the northeastern United States. There are in-clinic tests that screen dogs for heartworms, Lyme disease and two other tickborne diseases, Ehrlichia and Anaplasma. Not all veterinarians use these tests, but it has become common to test for all of these diseases annually when a dog is tested for heartworms. Because Texas veterinarians conduct routine heartworm screenings in healthy dogs, these tests have presented veterinarians with a problem as to whether it’s necessary to treat seropositive dogs (dogs that test positive on those screening tests) that are showing no clinical signs of disease. To clarify, a positive test does not necessarily mean your dog is sick or will become sick, but it does mean your veterinarian may consider treating your dog for Lyme disease or performing other tests to check for evidence of internal damage. 2

Blood work such as a Complete Blood Countblood test used to evaluate your overall health and detect a wide range of disorders, including anemia, infection and leukemia (CBC) test and chemistry panel typically does not show abnormalities unless there is significant kidney disease resulting from the infection. A urine test, called a urinalysis, will help determine if glomerulonephritis has developed as part of the infection. Other tests that may be recommended in a dog showing symptoms of Lyme disease are joint fluid analysis, a test for specific antibodies or even a kidney biopsy and urine culture.

Many veterinarians need to make the decision to conduct further testing or treat because up to 90 percent of dogs in areas where Lyme disease is endemic test positive. However, only about five percent of seropositive dogs develop symptoms of Lyme disease. Typically, signs of arthritis occur two to five months after contracting Lyme disease, but glomerulonephritis may not be apparent for years. Knowing that signs of disease take months to years to develop, veterinarians question whether to treat a dog with antibiotics just because of a positive test result. Many veterinarians do treat seropositive dogs with antibiotics just in case. The antibiotics used are relatively safe and inexpensive. However, there is no proof that the antibiotics will prevent glomerulonephritis in the future.

While many veterinarians take preventative measures, the American College of Veterinary Internal Medicine (ACVIM) does not recommend treating asymptomatic dogs. There is no evidence that treatment in a dog that is not sick prevents future illness. It also does not guarantee clearance of infection or that a dog will not develop serious kidney disease. 3 In addition, using antibiotics without specific need can contribute to antibiotic resistance. The ACVIM also recommends every Lyme-positive dog be monitored for proteinuria (protein in the urine, which is a sign of kidney disease) regularly. However, we do not know the ideal frequency of testing, and there are other causes of proteinuria than Lyme disease, so your veterinarian may conduct additional testing to rule out other causes.

The most common treatment for Lyme arthritis is an antibiotic called doxycycline. Glomerulonephritis is much more difficult to treat and may include antibiotics such as doxycycline, ACE inhibitors such as benazepril and immunosuppressive medications. Depending on the severity of kidney damage, intravenous (IV) fluids, a low-protein diet and gastroprotectants may also be required.

There is not a lot of data on the prognosis for dogs affected with Lyme disease, but we consider the prognosis for Lyme arthritis to be good with treatment. Unfortunately, Lyme nephritis does not respond as well to treatment and has a poorer prognosis.