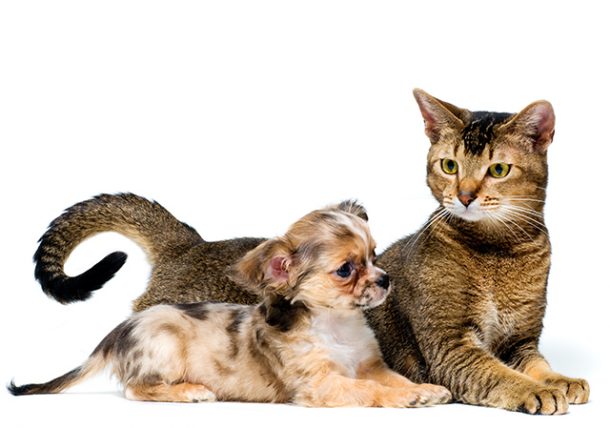 Part I: Intestinal Parasites in Cats and Dogs covered roundworms, hookworms, tapeworms and whipworms as well as their forms of transmission, clinical signs and treatment options. Part II will provide an overview of coccidia and giardia, which are parasitic intestinal protozoans.

Coccidia are protozoans (single-celled organisms) located in the small intestine of the host, such as an infected dog or cat. Although people are susceptible to a few species of coccidia, it is not considered to be a zoonotic disease. The various types of coccidia (i.e. Isospora species) tend to be species-specific (not shared between different species of animals). For example, the parasite is not typically shared between dogs and cats, but both dogs and cats can become infected by their own Isospora species.

Transmission of coccidia typically occurs when the host ingests materials (feces, soil, grass, etc.) contaminated with oocysts (a stage in the life cycle of the protozoan). Although not as common, transmission also can be through ingestion of transport hosts, such as small rodents. Coccidia is commonly found in young animals exposed to the feces of an infected mother.

Clinical signs of coccidiosis might include diarrhea with mucus in it, weight loss and, less frequently, anorexia and vomiting. The diarrhea and/or vomiting may lead to dehydration, especially in kittens and puppies.

Diagnosis is made through a microscopic examination of the feces. There are limited medications approved for treating coccidiosis that your veterinarian can prescribe.

Giardia are also protozoans located in the small intestine of the host. Like coccidia, they are believed to be fairly species-specific. The zoonotic potential of the dog and cat strains is possible, but it is considered rare.

The mode of transmission is through the ingestion of cysts (a stage in the life cycle of the protozoan) that are shed in the feces of an infected animal. This parasite is frequently waterborne because infected animal feces are washed into outdoor water sources from which the future host drinks. The cysts are susceptible to temperature extremes and to drying.

A common clinical sign of giardiasis is diarrhea, which may be frothy with excessive mucus and have a pungent odor. In people, the diarrheic stool is sometimes described as “gray, greasy, voluminous and malodorous.”

Diagnosis is made through a microscopic examination of the feces, but intermittent shedding of cysts can make diagnosis difficult. Treatments are available through a veterinarian. In addition to drug therapy, bathing the animal is recommended to remove fecal debris and cysts that may be adhered to its skin/coat.

Given the variety of intestinal parasites that dogs and cats can acquire, accompanied by the range of clinical signs these parasites produce, a pet owner should consult with a veterinarian on the best treatment and prevention protocols to pursue for each pet. It is also advisable for pet owners to understand the zoonotic potential of some of these parasites and not only apply prevention practices themselves but teach their children how to do so as well.

Thanks to Bob Garrison, DVM, M.S., and Ken Waldrup, DVM, M.S., Ph.D., for their insightful reviews of this article.