An Introduction to Intestinal Parasites 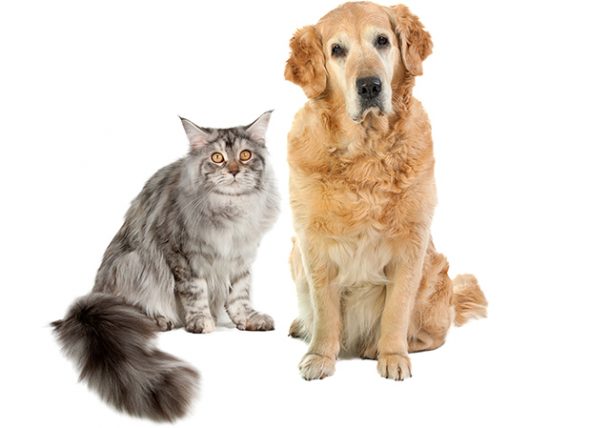 A parasite is an organism that lives in or on another being (the host) and takes its nourishment from that being. There are many types of intestinal parasites that can affect cats and dogs. Texas’ temperate climate supports the life cycles of numerous parasites, making them year-round health threats. This article is part one of a two-part series on common intestinal parasites and will cover four of the most common intestinal worms in cats and dogs. With any of these parasites, the clinical signs can range from none to debilitating and life-threatening. Animals with compromised immune systems, including the young, are more likely to develop the severe signs.

Also called ascarids, roundworms in their adult stage are located in the small intestine of the host. The common roundworms of dogs (Toxocara canis) and cats (Toxocara cati) are zoonotic parasites. A zoonotic parasite is one that can be transmitted or passed between animals and humans. If a person gets infected with a roundworm, the disease is called toxocariasisan infection transmitted from animals to humans (zoonosis) caused by the parasitic roundworms commonly found in the intestine of dogs (Toxocara canis) and cats (T. cati). If the microscopic stage of a roundworm migrates in human tissue and organs, it can cause conditions known as visceral larva migrans and ocular larva migrans. Both conditions are serious, and the ocular form can cause vision loss.

There are multiple ways animals contract the infection. Puppies commonly acquire roundworms prior to birth through the placentaa flattened circular organ in the uterus of pregnant eutherian mammals, nourishing and maintaining the fetus through the umbilical cord (transplacental) of their infected mother. The parasite also can be transmitted to puppies and kittens through ingestion of the infected mother’s milk (transmammary). Additionally, infection can occur by ingesting contaminated substances. For example, animals with adult worms pass the eggs in their feces (stool) and contaminate the environment. Other animals then ingest the eggs through directly eating the feces or other things contaminated with feces, such as grass or soil; putting contaminated items, such as toys, in their mouths; or by walking in feces or an egg-contaminated environment and then licking their paws. In addition, people can become infected if they ingest eggs. The eggs remain infective in the environment for years. (They are unaffected by inclement weather.) Yet another potential source of infection is by an animal eating a transport host, such as a rodent (i.e., a mouse or rat) or a rabbit. A transport host is one in which a parasite survives but doesn’t have notable development and remains infective for the final host.

One of the common clinical signs of roundworm infection is a potbellya large, protruding, rotund stomach. Other signs may include a dull coat, diarrhea, weight loss and/or failure to gain weight. Animals with roundworms may vomit them or pass them in their feces. The worms have an appearance similar to spaghetti.

Although seeing roundworms in vomit or feces indicates active infection, not all animals will pass the adult worms in this manner. Therefore, a microscopic exam of the feces that identifies eggs is the diagnostic test of choice.

Adult hookworms attach to the lining of the small intestine of the host and suck blood. There are many species of hookworms. The common southern hookworm (Ancyclostoma caninum) in dogs is a zoonotic parasite that causes ancyclostomiasishookworm infection of the small intestine, often leading to anemia and cutaneous larva migrans (also called creeping eruption) in people, which is itchy and appears as a winding, snake-like rash with blisters. Cats are susceptible to hookworms as well, specifically Ancylostoma tubaeforme. The northern hookworm (Uncinaria stenocephala) infects cats and dogs.

Hookworms are often transmitted in similar ways as roundworms. Additionally, transmission may occur when the larval stage of the worm penetrates the skin, typically when paws contact surfaces contaminated with larvae. Humans are infected in similar manners, including larvae penetrating the skin, such as bare feet. The eggs and larvae of hookworms thrive in warm temperatures and moist soil but cannot survive in freezing temperatures.

After a hookworm leaves a feeding site, blood continues to seep from the site. Intestinal bleeding can lead to stools that are tarry in appearance due to the presence of digested blood, anemiaa condition in which the blood doesn't have enough healthy red blood cells. or both. With anemia, a pet may become lethargic and have pale-to-white mucous membranes, such as the gums and the lining of the eyes.

Hookworms will not be overtly seen in the feces. A microscopic exam of the stool for eggs is required to make a diagnosis.

Common clinical signs of infection may include diarrhea (possibly with blood), weight loss, dehydration and/or anemia.

Whipworms will not be overtly seen in the feces, and a microscopic exam of the stool for eggs is required to make a diagnosis. However, they can be difficult to detect via routine fecal screening. Therefore, veterinarians may treat for whipworms based purely on the presumption of an infection founded on clinical signs rather than on the basis of a positive test.

Adult tapeworms are located in the small intestine of the host. The flea tapeworm (Dipylidium caninum) of dogs and cats is a zoonotic parasite. A flea larvae eats the tapeworm eggs passed in the stool of an infected animal, and then an animal or human becomes infected by eating the flea containing the developing tapeworm. An animal can acquire other tapeworms (i.e., Taenia species) by eating an infected intermediate host. An intermediate host, such as a rodent or rabbit, is one in which a parasite undergoes required development.

There usually are no clinical signs in infected animals, although weight loss and enteritis (inflammation of the intestines) might occur. Pieces of the tapeworm, which are the egg cases, can break off and be passed in the feces. These segments are moist and mobile at first and then become hard and dry, appearing like grains of rice in the feces. An animal may drag its hind end on the ground due to a tickling sensation caused by the exiting segments. (Another typical reason for an animal dragging its hind end is full anal glands.) Occasionally, several inches of a tapeworm may be passed in the feces. It will have a flat, ribbon-like appearance with either pumpkinseed-shaped or rectangular segments. Veterinarians make a diagnosis by tapeworms or tapeworm segments being seen in the feces.

Tapeworms are occasionally confused with pinworms. Animals do not give people pinworms as those parasites are passed between people.

If an animal is diagnosed with intestinal worms, there are a variety of anthelmintic drugsdrugs that expel parasitic worms and other internal parasites from the body by either stunning or killing them and without causing significant damage to the host that can be prescribed to treat the infection. Once the animal is dewormed, a veterinarian may also prescribe monthly preventive medication if available for that particular parasite or recommend a periodic exam and/or treatment protocol.

Given the variety of intestinal parasites that dogs and cats can acquire, accompanied by the range of clinical signs these parasites produce, a pet owner should consult with a veterinarian on the best treatment and prevention protocols to pursue for each pet. It is also advisable for pet owners to understand the zoonotic potential of some of these parasites and not only apply prevention practices themselves but teach their children how to do so as well.

Thanks to Bob Garrison, DVM, MS, and Ken Waldrup, DVM, M.S., Ph.D., for their insightful reviews of this article.