Pigs: They May Surprise You 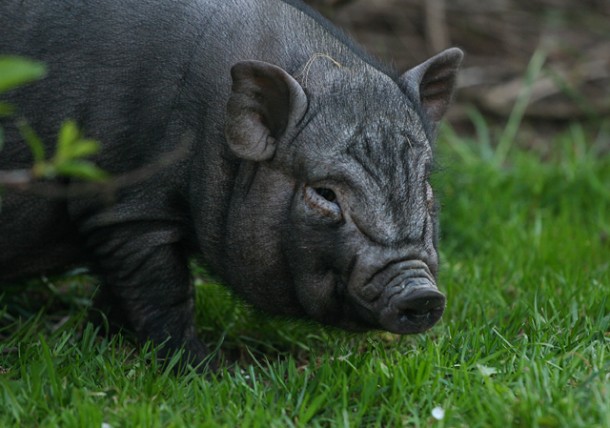 Swine, hogs, pigs! These names describe the member of the species Sus scrofa, cloven-hoovedA cloven hoof is a hoof split into two toes. animals with bristly hair and a long flexible snout. Swine are comparable to humans in many respects: diet, size, environmental preferences, psychology and physiology. Their diet consists of a variety of plants, insects and animal protein, making them omnivorous. They can range in size from three-pound piglets to 900-plus-pound boars or male hogs. They flourish in temperate climates with easy access to water and shelter. Pigs are some of the most intelligent animals on earth. They have a complex social structure and, when given a choice, will not defecatedischarge feces from the body. where they live and eat. Despite their reputation, pigs are considered the cleanest animals, resorting to laying in the mud because they cannot sweat. Their cognitive ability can rival a three-year-old human. The way in which their body functions is very similar to humans, making them excellent models for human medicine. Compared to other animals, they are considered excellent survivors in difficult situations.

This species includes pet pot-bellied pigs, domestic pork-producing swine, specialized research breeds of pigs and feral hogs. All swine can be kept domestically, the important differences being the facilities that the pigs are kept in and the relationship that develops with the owners and caretakers. Miniature and pot-bellied pigs are popular household pets. They can be trained to respond to commands, walk on a leash and use the bathroom outside. Their intelligence and personality exceeds that of dogs and cats in many regards. As Winston Churchill once said, “A cat will look down to a man. A dog will look up to a man. But a pig will look you straight in the eye and see his equal.” It is no wonder why pigs are sought after as pets!

Swine intended for pork will often be kept in clean, comfortable barns with other pigs of similar size and age. Caretakers in these operations care for the pigs in a symbiotic relationship in which good welfare leads to good growth, leading to a good reputation and profit for the producer. Products that we derive from swine include bacon, pork roasts, pork loin and ham.

Many homeowners associations refuse to allow swine of any type in their neighborhoods. These rules need to be visited before getting a pet pig. Otherwise, pet pigs are comfortable when their person is comfortable. For example, if you are too hot outside, it is too hot for your pet pig. Your pet pig needs to eat pig food specially designed for miniature and pot-bellied pigs. They will immensely enjoy your food, but they would be better off only sharing a salad or fruit with you. Most recommend spaying or neutering your pet pig at an early age. They are extremely cute when they are little, but when they reach puberty at approximately five months old, hormonal changes can make them seem like teenagers. Discuss vaccinations with your veterinarian as pigs can carry many diseases that humans can get and pigs can be exposed to other pigs in the neighborhood or feral swine.

Feral swine are garnering more and more attention since their beginnings in the 1500s. The origin of feral swine began as pigs brought over by early explorers for food. Some escaped, multiplied and were added to in number by the addition of fugitive porkers and Russian wild boars brought for sport. Current rough estimates figure there to be four to five million feral hogs in the U.S. with two to three million in Texas alone. Swine are considered an invasive species in the wild and are notorious for destroying pastures, lawns and automobiles, as well as scavenging for food sources. Many times destruction of property such as fencing, terrain and field crops goes unreported and therefore unnoticed by the general public. Feral swine will prey on other animals and carry diseases that may affect multiple species, posing a threat to the health of domestic livestock and humans. Wild hogs will try to run when confronted by humans, but when cornered, they become vicious fighters. Feral swine also become a dangerous threat when they venture onto public highways; a collision between a speeding vehicle and a sizeable feral swine is dangerous for all involved. Tremendous efforts are underway to get the wild population in check. There are both lethal and non-lethal ways being used to manage the feral hog population, including physical barriers to exclude pigs, guard animals to protect livestock, vaccinating animals to prevent disease spread, trapping and hunting.

If the feral pig’s survivability is any indication, the human race may be in good shape. Swine serve as models for research into human medical conditions because of their similar size and structure. In some instances, pig hearts have been merged with humans to replace faulty heart valves. Additionally, a number of medicines, such as insulinA hormone produced in the pancreas that regulates the amount of glucose in the blood. The lack of insulin causes a form of diabetes., can come from swine.

Pigs are intertwined throughout our society. Whether you like to eat bacon, hunt wild boars or cuddle with a pot-bellied pig, swine have a role in our lives.