Rabies: A Danger to Pets and Humans 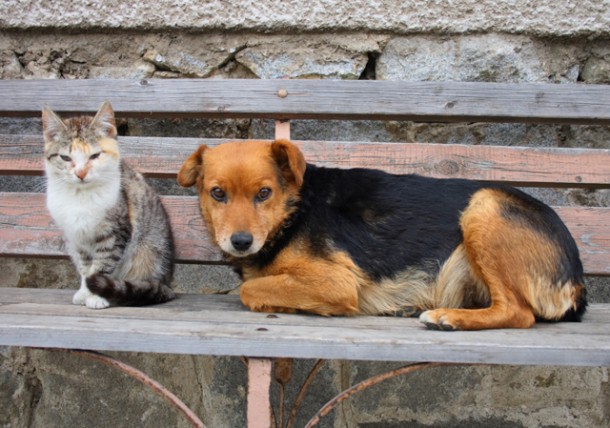 Rabies is a viral disease of mammals most often transmitted through the bite of a rabid animal. The vast majority of rabies cases occur in wild animals like raccoons, skunks, bats and foxes. However, because rabies is fatal to both pets and humans, it is important to know about the disease and how to avoid it.

The rabies virus infects the central nervous system, leading to infection in the brain and then death. The early symptoms of it in humans are similar to that of many other illnesses, including fever, headache and general weakness or discomfort. As the disease progresses, more specific signs appear and may include insomnia, anxiety, confusion, slight or partial paralysisThe loss of the ability to move (and sometimes to feel anything) in part or most of the body, typically as a result of illness, poison, or injury., excitationThe action or state of exciting or being excited., hallucinations, agitationA state of anxiety or nervous excitement., hypersalivation (increase in saliva), difficulty swallowing and hydrophobia (fear of water). Death in humans usually occurs within days of the onset of these signs.

Any and all mammals are susceptible to rabies, though there are a few key species known to be reservoirsThe place where an infectious agent is normally present before infecting a new human. for the disease. The main species involved are bats, raccoons, skunks and coyotes. The virus can be transmitted from these animals to humans and pets through a bite or by getting the virus into a mucous membrane (eyes, nose, mouth). Cases have also occurred through organ transplants. In pets, the virus enters into the muscle of the pet and travels up nerves from the site of the bite to the brain. The farther away from the brain the bite occurs, the longer the time it takes for the pet to show signs of infection. During this time, your pet is not contagious as there is no virus in your pet’s saliva. However, it has been proven that the virus is shed in the saliva for a few days prior to signs of illness being shown by the infected pet.

Infected pets usually die within seven days of presenting clinical signs of the disease. However, as mentioned earlier, an infected animal may shed the virus in its saliva for up to five or six days before it shows any signs of the disease. For that reason, health authorities recommend quarantiningTo impose isolation on (a person, animal, or place). animals that inflict a bite to a human for 10 days. If the animal does not show any signs of rabies during that 10-day interval, it can be assumed that the animal did not have virus in its saliva at the time of the bite. If the animal displays signs consistent with rabies, the patient will be prescribed the post-exposure immunization series.

What about pets that are bitten or otherwise exposed to an animal that might be rabid. If possible, the biting animal should be humanely killed (without injuring the head) and submitted for rabies testing. If the animal is rabid, or cannot be tested, what to do now? Texas law addresses this question.

There is no way to definitively test a pet for rabies while it is alive. Testing on pets is performed post-mortem (after death) by examining certain sections of the brain using the direct fluorescent antibody test. Because of this, it is important to always try to preserve the head and brain when you are dealing with a possibly rabid pet. Doing so can save the people affected needless worry and expense due to post-exposure prophylaxis Any preventive medical treatment started immediately after exposure to a pathogen (such as a disease-causing virus), in order to prevent infection.treatments.

There are varied protocols for treating humans exposed to rabies. If the human has formerly been immunized against rabies, they will receive two doses of the vaccine three days apart. These individuals are most often people with high risk of exposure, such as veterinarians, shelter workers and laboratory personnel. In humans who have not been previously immunized, passive antibodiesA blood protein produced in response to and counteracting a specific antigen. against rabies (Human Rabies Immunoglobulin [HRIg]) are administered along with the vaccine. The HRIg is often injected into or nearby the bite or other point of suspected entry. This is followed by vaccines administered every few days over the next two weeks.

With rabies, prevention is by far the most important and effective method of control. The first line of defense is taking your pet to your veterinarian for scheduled rabies vaccinations. The animal rabies vaccine is very effective in protecting your pet from the virus. It is also important to be cognizant of potential exposures. If an animal like a bat is found around children too young to adequately communicate or in a human’s or pet’s sleeping quarters, the appropriate steps need to be taken immediately. Animal Control should be called to appropriately capture and remove the bat and send it for testing. In the case of possible exposure via other wildlife, the suspect animal should also be removed by appropriate personnel and tested. If the animal cannot be tested and there is sufficient reason to believe an exposure occurred to either a person or a pet, appropriate post-exposure prophylaxis (PEP) or quarantine should be initiated.

Though rabies is completely preventable through vaccination, it is still a killer of thousands each year around the world. The vast majority of these cases are due to exposure to rabid, free-roaming dogs. Most deaths from this virus occur in countries with inadequate public health resources and limited access to preventive treatment. These countries also have few diagnostic facilities and almost no rabies surveillance.