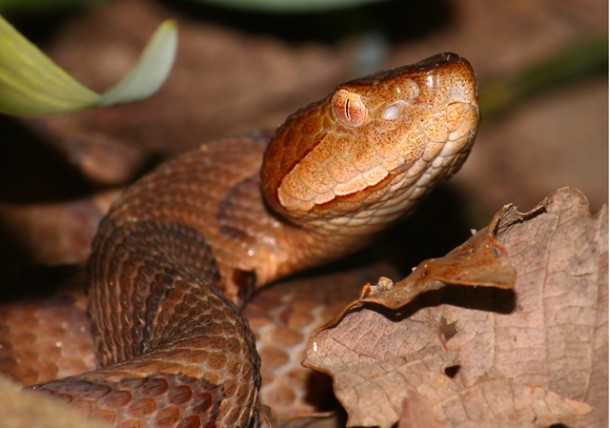 A snakebite is something we all hope our pets will never suffer, but unfortunately they are a very real problem for pets and owners in Texas. Texas is home to a variety of venomous snakes whose bites can potentially harm pets, so it is essential to recognize dangerous snakes and know what to do if your pet is bitten. Texas pit vipers, rattlesnakes (especially in central, south and west Texas) and Copperheads are most often responsible for venomous bites due to their prevalence and relative aggression. Water Moccasins in Texas, also known as Cottonmouth snakes, also have venomous bites. Coral snakes are also present, but bites are less common because they must “chew” on a victim in order to introduce venom, but they are particularly hard to treat and the antivenom can be very difficult to obtain. Venomous snakebites in Texas are a problem in both rural and urban areas. Urban sprawl into snake habitats brings people and pets into frequent contact with snakes, as those living in Austin and central Texas know all too well.

The best way to avoid snakebites in Texas is to know when you and your pet are most likely to come in contact with a snake and use appropriate caution. Snakes are coldblooded creatures that are most active during periods of warm temperatures, usually anytime the temperature creeps above 80 degrees Fahrenheit. Most venomous snakes found in Texas frequent tall grasses, bushes and woodpiles, though Water Moccasins prefer proximity to water. When you take your dog outside, keep it on a leash and away from such places. Also, keep your yard from becoming a good snake hideout by keeping grass short and shrubs trimmed.

There is a rattlesnake vaccine available for dogs but limited scientific evidence available documenting how much protection it actually provides. Vaccines don’t offer 100-percent protection, and antivenom is likely to be administered despite being previously vaccinated. Discuss your options with your veterinarian. Snake aversion training programs aimed at teaching dogs to avoid the predators are offered in some areas. Lastly, consider enrolling your pet in a health insurance plan if you live in or travel to high-risk areas. Because antivenom and associated tests and treatments for snakebites are quite expensive, pet insurance can be a good way to offset the cost.

Signs of a snakebite

Most dogs and cats are bitten on the face or mouth and sometimes the feet and legs. The bite punctures themselves are often tiny and may be difficult to see due to associated swelling or location of the bite. Signs and severity of a bite are related to how much venom was introduced into the pet, as well as the location of the bite and the size of the pet. Smaller animals are often more severely affected. The size of the snake and the time of year are not accurate predictors of how much venom is associated with a bite, so all bites should be assumed to be venomous and serious.

Most pets will display similar signs in the event of a venomous snakebite. Snakebites are associated with rapidly progressive swelling, bruising, significant pain and a small amount of bloody or black drainage from the punctures. Bites to the head and mouth can lead to difficulty breathing due to the profound swelling that may develop near the airway. Some dogs and cats can progress rapidly to cardiovascular shock, which includes a precipitous drop in blood pressure accompanied by pale gums, rapid heartbeat, difficulty breathing, collapse and/or vomiting and diarrhea. Occasionally dogs and cats can demonstrate nervous system signs as well, such as tremors, weakness or even seizures. Coral snake bites are unique as they are particularly dangerous and usually manifest mainly as nervous system signs and difficulty breathing, showing little or no local signs. In the time following snakebite, it is not uncommon for the skin at the bite sites to become black and necrotic (dead) and fall away, leading to secondary wounds that can require significant care and sometimes surgery.

If your pet is bitten…

Head to the closest veterinary hospital immediately. Be sure to keep the contact information for your family veterinarian and an after-hours emergency veterinary facility on hand. If you or your pet kills the snake, consider collecting the dead snake for identification with extreme care, though this is not crucial except in the case of coral snake bites. Do not give your pet any medications before going to the veterinarian. Do not attempt to apply a tourniquet above the bite site, lance the skin or suction venom from the wound. Quite simply, it is most important to seek immediate veterinary care for your pet; no home care measures should be cause for delay in getting to the veterinary hospital.

Diagnosis and treatment of a snakebite

Even if you do not see your pet near a snake, your veterinarian can often make a rapid diagnosis of venomous snakebite based on the observable signs and history of the pet. If there is any question about a painfully swollen area on your pet, it may be necessary to shave the hair extensively to locate bites or bruising. Your veterinarian may perform further testing, such as a blood smear or blood count, to confirm a diagnosis or to obtain necessary baseline information about the pet. Tests are also often done to determine the blood’s ability to clot and to monitor if a pet has received sufficient antivenomAn antiserum containing antibodies against specific poisons, especially those in the venom of snakes, spiders, and scorpions. to neutralize the snake venom from the bite.

Pit viper antivenom is the only treatment that can neutralize venom in your pet’s system. Other treatments such as intravenous fluids for cardiovascular support and treatment of shock, pain medication and antibiotics for complicated wounds are important but will not negate the effects of the venom itself. Antivenom should be given as soon as possible, but it is important to understand it will not reverse effects of envenomation already present but only help stop progression of envenomation. Since the potency and amount of venom in a pet cannot readily be known, it also cannot be predicted how much antivenom will be needed, but fortunately many pets will not require more than one treatment. Continued monitoring of the pet’s physical signs, laboratory parameters and response to treatment are important.

Venomous snakebites are, unfortunately, a common threat to dogs and cats in Texas, and a bite can result in severe and costly consequences. Take steps to avoid your pet coming into contact with snakes, and if they are bitten, seek veterinary attention right away.