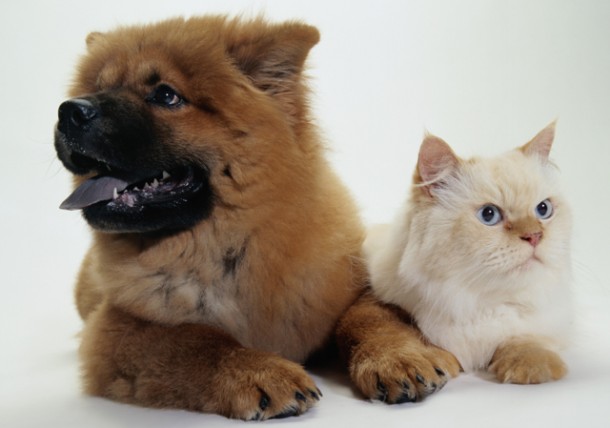 Ornamental plants bring beauty to the home and garden and are a common fixture in most landscaping. However, a number of these plants are very toxic to dogs and cats. The symptoms of intoxication can range from mild gastricOf the stomach. irritation to seizuresChanges in the brain's electrical activity and death. In the case of ingestion of a toxic houseplant, immediate treatment is crucial. Call your veterinarian as soon as you suspect that your pet has ingested any part of an ornamental plant.

Sago palm is a very popular ornamental plant in landscaping. All parts of the plant are highly toxic to dogs. Intoxication can occur even if the plant is only chewed and not fully ingested. The liver is the organ most affected by the toxins. The earliest symptoms of sago palm toxicity are vomiting and diarrhea, progressing to jaundice (yellowing of the gums, skin and eyes), abdominal swelling and hemorrhageAn escape of blood from a ruptured blood vessel, especially when profuse.. Your veterinarian may induce vomiting, pumping the stomach, and decontaminationThe process of cleansing an object or substance to remove contaminants such as micro-organisms or hazardous materials, including chemicals, radioactive substances, and infectious diseases. with activated charcoal and IV fluid therapy. In later stages of intoxication, supportive care, including intravenous fluids and blood or plasma transfusions, may be necessary. The goal of supportive care is to help the body return to functioning on its own. While supportive care doesn’t necessarily reverse intoxication, it helps support the body’s functions during healing. Prompt identification and treatment of sago palm intoxication is key to treatment; once the liver is damaged, 50 percent of dogs will die even with aggressive treatment, so early intervention is of the utmost importance.

Many of the plants known as true lilies are highly toxic to cats. This category does not include peace, Peruvian or calla lilies, although, it does include Easter lilies, day lilies and tiger lilies, among others. Much like sago palm, the entire plant does not need to be eaten in order to cause intoxication in cats. Lilies are especially toxic, even if a small amount is ingested. Drinking the water in a vase or ingesting pollen may be enough to cause intoxication in a cat. The kidneys are the organs most affected by lily intoxication. Symptoms of ingestion in cats include vomiting, diarrhea and anorexiaA lack or loss of appetite for food (as a medical condition)., followed by acutePresent or experienced to a severe or intense degree. kidney failure (dehydration, extreme thirst, inappropriate urination). Treatment must be initiated within 24 hours of ingestion in order to be successful and includes induction of vomiting, pumping the stomach, activated charcoal and aggressive fluid diuresisIncreased or excessive production of urine.. Kidney function will also be closely monitored, and medications to prevent and reduce stomach upset may be administered.

We are often cautioned about the toxicity of poinsettias, but in actuality, the plant is only an irritant to dogs and cats, rather than a toxin. GastrointestinalOf or relating to the stomach and the intestines. irritation, nausea and vomiting are the usual symptoms of poinsettia ingestion. Treatment of poinsettia ingestion includes the administration of activated charcoal and medications to protect and soothe the stomach.

Along with poinsettias, mistletoe is a popular decorative choice for the winter holidays. Unlike poinsettia, mistletoe is quite toxic to dogs and cats. Mistletoe can affect the nervous systemThe network of nerve cells and fibers that transmits nerve impulses between parts of the body., causing symptoms ranging from nausea and vomiting to dilatedEnlarged. pupils and convulsionsA sudden, violent, irregular movement of a limb or of the body, caused by involuntary contraction of muscles and associated especially with brain disorders such as epilepsy, the presence of certain toxins or other agents in the blood.. Treatment is limited to supportive care (intravenous fluids, pumping the stomach, activated charcoal and anticonvulsants, if necessary).

Both of these ornamental plants are highly toxic to dogs and cats and affect primarily the cardiovascular system. Symptoms of intoxication are similar for both plants and include decreased heart rate, abnormal breathing and seizuresChanges in the brain's electrical activity.. Without prompt intervention, these intoxications can lead to cardiac failureOccurs when the heart is unable to pump sufficiently to maintain blood flow to meet the needs of the body. and death. Treatment includes administration of medication to counteract the abnormally functioning heart. Supportive care should be initiated, and diazepam (Valium), an anti-seizure medication, may be administered if the patient is experiencing seizures.

The yew plant, a popular shrub, is highly toxic to dogs and cats. All parts of the plant, including the berries, can be poisonous and should be avoided. The yew plant toxin affects the brain and nervous systemThe network of nerve cells and fibers that transmits nerve impulses between parts of the body., as well as the cardiovascular systemThe system that circulates blood and lymph through the body, consisting of the heart, blood vessels, blood, lymph, and the lymphatic vessels and glands., causing symptoms such as drooling, nausea, weakness, difficulty breathing and heart malfunction, ultimately leading to the heart no longer functioning and death. Unfortunately, there is no good treatment for yew intoxication other than supportive care. The supportive care that is administered (e.g., IV fluids) provides care for symptoms; however, currently there is no antidote to reverse the toxic effects. A medication such as atropine can be administered, and breathing assistance may be performed with, unfortunately, little success.

Brunfelsia is a flowering shrub that is classified in the nightshade family. Brunfelsia contains toxins that affect the nervous systemThe network of nerve cells and fibers that transmits nerve impulses between parts of the body.. Intoxicated dogs and cats may act and appear as if they are drunk. Other symptoms include nausea, vomiting, anxiety, tremors and convulsionsA sudden, violent, irregular movement of a limb or of the body, caused by involuntary contraction of muscles and associated especially with brain disorders such as epilepsy, the presence of certain toxins or other agents in the blood.. Treatment for toxicity from Brunfelsia includes a medication called pentobarbital and other anti-seizure medications, as well as supportive care, including a hospital stay and IV fluid therapy.

Jimsonweed or moonflower is a large, showy flowering shrub that is highly toxic to dogs and cats. The toxin affects the nervous and cardiovascular systemsThe system that circulates blood and lymph through the body, consisting of the heart, blood vessels, blood, lymph, and the lymphatic vessels and glands.. Symptoms of ingestion include fever, increased heart rate, twitching and dilatedEnlarged. pupils. Left untreated, pets suffering from ingestion can develop respiratory failureInadequate gas exchange by the respiratory system, with the result that levels of arterial oxygen, carbon dioxide or both cannot be maintained within their normal ranges. and death. Treatment of toxicity symptoms includes an antidote (physostigmine) and supportive care, including monitoring and IV fluid therapy.

Toxic plants surround our homes, so knowing which varietals are harmful to our pets helps when toxicity occurs. Pet owners should be aware that these plants can also be toxic to livestock, horses and human beings. While this is a list of commonly found toxic plants, this is by no means an exhaustive list of all toxic plants. Additional information on plant concerns can be found at the Pet Poison Hotline (800/213-6680), the ASPCA Animal Poison Control Hotline (888/426-4435) and Texas A&M website, as well as your local veterinarian.