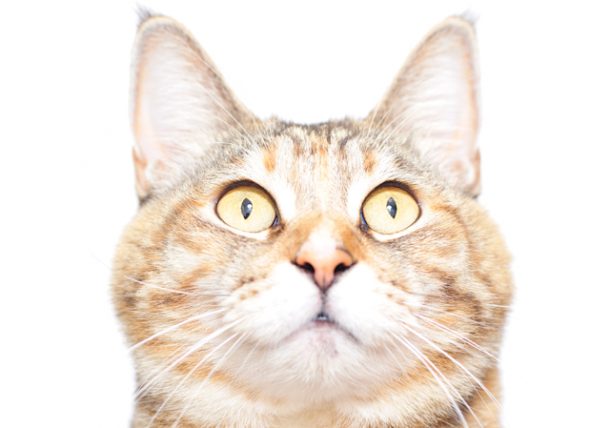 Some cats vomit so frequently that cat owners have developed a rather blasé attitude about it. We see it as the result of eating too fast, having a ‘sensitive’ stomach, coughing up ‘normal’ hairballs or just a form of ‘normal’ for some cats. However, a study recently published in the Journal of the American Veterinary Medical Association1 has taken a critical look at chronic vomiting and found that it is not normal and should not be tolerated. Below are highlights of the report.

There are two diseases that account for more than 95 percent of the cases of CSBD. One is Inflammatory Bowel Disease (IBD), resulting in the small bowel walls being packed with inflammatory cells. This disease is much like IBS (Irritable Bowel Syndrome) in people. The other disease is lymphoma, a form of cancer. The walls of the small bowel are packed with lymphoma (cancer) cells. The cause of the inflammation of either disease is unknown. Both of these diseases are progressive, meaning they get worse over time. In fact, mounting evidence shows there is a transition in some cats from IBD to lymphoma. This is one of the main reasons that an aggressive approach to getting a diagnosis is important.

One of the pieces of evidence for progression from IBD to lymphoma is the age of the two groups. IBD has been diagnosed in cats as young as two years and as old as 18 years. We have never seen intestinal lymphoma in cats younger than six years. Therefore, IBD tends to be in younger cats and lymphoma in older cats. However, the two age groups overlap so much that it is dangerous to make a diagnosis based on age.

If the cat’s history supports CSBD, an ultrasound study is performed on the stomach and small intestines. If the ultrasound shows that either organ has thickened walls, a biopsy is needed to determine the cause. Although endoscopic biopsiesprocedure to obtain a tissue diagnosis of potentially symptom-producing lesions are used in some cats, the best samples are obtained with surgery. The abdomen is opened, so biopsy samples can be taken from three or more locations. The samples are submitted to a pathologist for microscopic analysis. The pancreas and liver are biopsied at the same time so the extent of disease can be determined.

If biopsies are not feasible for you or your cat, a food trial can be performed. A hypoallergenic diet is encouraged exclusively for six weeks. If the vomiting, diarrhea or weight loss stops, it is a food reaction (allergy), and the special diet should be continued long-term. However, less than 10 percent of cats with CSBD have a food reaction. Therefore, conducting a food trial as the first course of action has a low success rate and results in six lost weeks that the cat needed badly for treatment.

The good news is IBD is a treatable disease, and most forms of lymphoma are also treatable. Therefore, most cats greatly benefit from having biopsies performed. Contact your veterinarian about performing the required tests to address with your cat’s chronic vomiting. It can improve your cat’s quality of life and even be life-saving.

Gary Norsworthy, DVM is a feline-only specialist who is a graduate of Texas A&M College of Veterinary Medicine. He lives in San Antonio, Texas and owns the Alamo Feline Health Center.