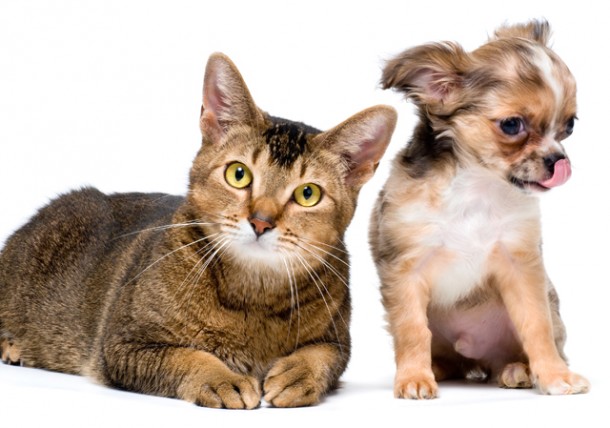 Toxoplasmosis is a disease caused by the toxoplasma, a zoonotic parasite that lives in the intestines of cats. The toxoplasma reproduce by creating microscopic oocysts that are passed in the bowel movement. When the cat grooms itself, these parasites may spread to other areas on the body. Oocysts may spread to the air when the litter box is cleaned. Animals may ingest oocysts if they eat the grass where a cat has had an infected bowel movement. The oocysts then hatch in the animal, travel through the intestine and migrate into the muscle where the parasite forms cysts. Humans can get toxoplasmosis by petting a cat and then eating food, by inhaling the oocyst while cleaning the litter box or from eating rare meat that contains cysts. In non-pregnant humans, toxoplasmosis parasites may not cause any symptoms or may cause sore muscles and flu-like symptoms. If a pregnant woman gets the toxoplasmosis parasite, the parasite can travel through her body and pass into the baby’s brain, causing brain damage. To reduce the risk of contracting the parasite, pregnant women should not clean out a cat’s litter box, should eat meat cooked well-done and should always wash their hands before and after handling raw meat. Humans can also be exposed to toxoplasma oocysts in their gardens, so it is recommended that gloves are worn when doing gardening activities.

Roundworms live in the intestines of dogs and cats. When an infected animal has a bowel movement, thousands of eggs are passed into the soil, where they can live for many years. Sun and freezing weather will not kill these microscopic eggs. Roundworm eggs can contaminate produce as well as unwashed hands. When a human ingests roundworm eggs, the eggs hatch in the intestines and start to burrow through the body, stopping somewhere throughout to form a cyst. The burrowing can cause fever, muscle soreness and generalized achiness. The severity of the symptoms depends on the number of eggs ingested. Occasionally, a cyst will form at the back of the eye. Eyes have been removed because these cysts were thought to be tumors. Children are most likely to eat roundworm eggs because they may ingest dirt and eat food with dirty hands. To avoid accidentally eating roundworm eggs, wash your hands before eating, thoroughly wash fruits and vegetables and keep sandboxes covered to prevent stray cats from using them as litter boxes.

Tapeworms are another zoonotic parasite that can be transmitted to humans. Tapeworms have an intermediary host, which means the tapeworm eggs must be eaten by something else, like a flea, where the egg hatches and creates a cyst that, when eaten, forms a tapeworm. Humans can sometimes eat a cyst, which then forms a tapeworm in the body. One way humans can come in contact with a cyst is when a dog or cat bites a flea and breaks its shell, causing the cyst to come out onto the fur. Petting the fur and eating something without washing your hands can lead to accidentally ingesting a flea that contains tapeworm eggs. Small children are most likely to accidentally ingest tapeworm eggs because they are prone to putting items into their mouths. Washing your hands before eating is a simple prevention.

Hookworms live in the intestines of dogs and cats and produce fragile eggs that quickly hatch. The larvae survive in warm moist environments. Hookworm eggs can survive for months if they get under even a small amount of soil, allowing for human and animal reinfections, making hookworm eradication extremely difficult. The larvae can burrow into human skin, causing skin irritation. The irritation causes itching and infection and may look like a squiggly line under the skin. If a person rubs his or her eye with a hand that contains the parasite, the hookworm can penetrate the eye and cause blindness. The larvae cannot live longer than a few days in humans. The main way to prevent humans from coming in contact with hookworms is to wear shoes and use gloves when gardening or working in warm, moist areas where dogs and cats may have had a bowel movement.

Stan Blackwell, DVM, MBA, is a graduate of Michigan State University’s College of Veterinary Medicine who resides in the oldest town in Texas—Nacogdoches. He works as a federal government employee as a veterinarian.