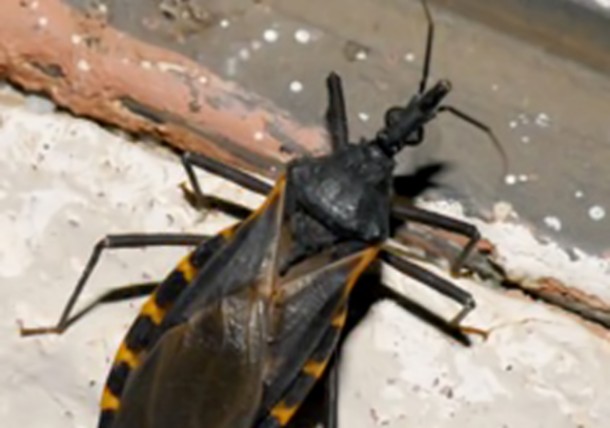 Chagas disease has been in the news a lot this year, specifically within the past couple weeks. In Texas, hundreds of dogs are infected with the parasite that causes the disease.

How do Dogs get Infected with Chagas?

The protozoal speciessingle-celled organisms with animal-like behaviors, Trypanosoma cruzi (T. cruzi), lives in the intestinal tract of the reduviid bug (photo), which is dubbed the kissing bug, assassin bug or bloodsucker since the latter is exactly what it does. The protozoa infects the kissing bug when the insect feeds on other mammals such as mice, rats, raccoons or skunks, etc. that already have the organism in their blood. The kissing bug in turn infects the dog with the T. cruzi protozoan when it defecates around the area of its bite, around a break in the skin or in the mucous membranes (around the eye or mouth, for example). T. cruzi can also be contracted by eating the whole kissing bug, which is typical of a dog.

Is Disease Passed between Humans and Animals?

While this parasitic disease is primarily found in dogs in our state, it is also a huge problem for people in Central and South America. Fortunately, transmission of the parasite from the dog to human has not been known to occur, but an infection found in a dog means that humans in the vicinity also risk exposure to the kissing bug.

What are the Symptoms of the Disease?

The disease causes acute and chronic heart problems in both dogs and humans. When they are first infected, dogs and humans may become acutely ill with a variety of symptoms from general malaise to heart rhythm abnormalities or other cardiac signs. In unfortunate cases, sudden death from heart failure can occur. Often times, the acute stage of the illness goes unrecognized, though the human or dog remains infected with the parasite. The disease then becomes chronic and patients may show a variety of signs over the years from slow, progressive heart failure (cardiomyopathyacquired or hereditary disease of the heart muscle) to no outward symptoms of the disease. Generally, blood tests are the most common way to determine if your animal has the disease and/or has been exposed.

There is no known cure for Chagas disease in dogs. Pregnant dogs can pass the organisms to unborn pups, which might cause severe illness or even death. While there are no treatments available to treat a dog with this disease, there is treatment for clinical signs such as fever, lethargy and heart disease, etc.

What are some bug control methods?

Common over-the-counter roach-killing insecticides may kill kissing bugs, however treatment of your house and yard by a pest control professional is the wisest course of action for protection from bug exposure. Taking measures to decrease the wild animal reservoirs in and around your yard, reducing brush such as woodpiles or heavy bushes near your house and yard and limiting nighttime lighting in yards that can attract kissing bugs are also good methods of kissing bug control. Because kissing bugs are nocturnal and they like to hide in burrows, under logs, etc., don’t let your dog sleep outside at night in areas where kissing bugs are known to inhabit.

Recently, scientists from Texas A&M University found approximately 30 to 50 percent of the bugs they examined are infected with the parasite, so not all kissing bugs living in Texas carry the Chagas-causing protozoa. Despite this fact, don’t take the chance of letting your dog come in contact with the kissing bug. Limiting your dog’s chance of encountering kissing bugs is the best method of prevention of Chagas disease. If you want to know more about the disease in dogs, talk to your family veterinarian who can discuss the risks, symptoms and possible treatments for Chagas disease with you.