The Five Freedoms of Animal Welfare 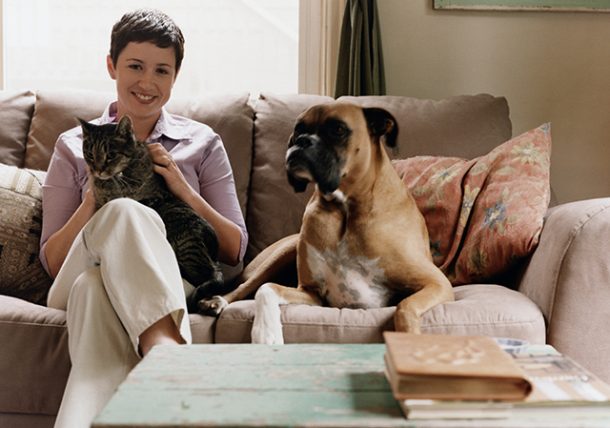 Pet ownership is a big responsibility. Part of being a responsible pet owner involves ensuring your companion animal enjoys a high quality of life. Many traits of a high-quality life are described in the Five Freedoms of Good Animal Welfare, a report that is recognized as one of the most important documents for the provision of good welfare. These freedoms were developed approximately 25 years ago by the Farm Animal Welfare Council in an effort to address the public’s concern about the welfare of livestock. The Five Freedoms provides insight into the proper treatment of all animals, regardless of the species, and is one of several methods used to assess welfare. Some caveats to that statement include the following: An animal’s welfare is never perfect, just like in humans. For example, a person may be laying in a comfortable bed, enjoying fine music and beautiful sunshine and also be deathly ill. A second qualm is that these Freedoms were designed for farm animals in the United Kingdom in the mid-1990s. They were not intended to cover all species and probably not even livestock in other countries. A third caveat is there is room for much interpretation in the application of each concept. Finally, even when a Freedom applies to an animal directly, it is sometimes necessary to disregard it.

Freedom from Hunger and Thirst

The first of the Five Freedoms is freedom from hunger and thirst. This is further described as the “ready access to fresh water and a diet that maintains full health and vigor.” Because this Freedom was intended for livestock (species that normally would graze through the day), the wording could be interpreted as food that should be available “on demand.” Cat owners realize that the hungry cat at 4 a.m. is going to have to wait a few more hours before it eats. The concept of “on demand” eating may be problematic with the development of obesity and abnormal behavior as well as increased caloric density of food. This can be an issue even in livestock, particularly stall-housed pregnant pigs. In this case, veterinary professionals usually recommend dietary restrictions to prevent obesity, but it can be coupled with stereotypic behaviors. For these reasons, freedom from hunger is interpreted as a reasonable diet available during the day.

There are times when this Freedom must be violated. For example, veterinarians require animals undergoing surgery to hold off on food for several hours to decrease the likelihood of aspiration during or after surgery. In this case, short-term hunger is necessary to prevent poor outcomes. This is no different than in human medicine when people having a procedure are told not to eat or drink after a certain hour. This may even be true for a simple blood draw for humans testing for cholesterol.

The intended meaning of freedom from discomfort was “an appropriate environment, including shelter and a comfortable resting area.” Interpretation of this standard results in varied opinions. For dogs and cats, some people consider that keeping animals outdoors doesn’t meet the intention of this Freedom, and yet that is where these species evolved. In dairy cattle, loafing sheds can have earthen floors, sand bedding or “water beds.” Scientists are evaluating the benefits and disadvantages of each item, but the interpretation of “comfortable” varies. The word means the softer the better, and yet cattle evolved lying on the ground. Interpretations vary based on the opinions of humans and (of course) not of cows.

Freedom from Pain, Injury and Disease

The third Freedom identified resonates significantly with veterinarians. There is no way to totally prevent health issues from occurring, even with the best preventive care. The intention of this Freedom is to prevent disease when possible and to mitigate pain, injury and disease quickly, as stated in the associated description: “disease prevention or rapid diagnosis and treatment.”

There are some interesting debates surrounding what this Freedom implies, particularly as it relates to dogs and cats. The description that accompanies this Freedom adds the need for “sufficient space, proper facilities and company of the animal’s own kind.” A literal interpretation would mean that having a single dog and/or cat would be equated with poor welfare, so any pet households should have at least two members of a species (humans don’t count as company for an animal). We could make the argument that domestication has changed the social needs of dogs and cats such that close interactions with another species, typically humans, would suffice. Would this argument also hold true for a working Komondor as it lives with and guards a flock of sheep, and if not, how can one argue for humans as companions but not sheep?

The interpretation of the freedom to express normal behavior also raises questions for people who own livestock. Livestock species are social and typically live with similar animals, but how much contact is required? Is visual contact between horses sufficient, or do they need nose-to-nose contact or the ability to interact without barriers?

Broad interpretation of this Freedom has come to mean that “bad” or “injurious” behaviors are not to be included. Aggression is a normal behavior that can result in injury or death, but allowing aggressive interactions may compromise the welfare of both animals and humans.

Freedom from Fear and Distress

Fear and stress are a normal part of life, but these are things we try to minimize. The description of this Freedom recognized this by stating that the Freedom should provide “conditions and treatment that avoid mental suffering.” Humans cannot know what an animal is thinking, but we can use their behavior and environmental scanning to identify situations that might cause fear or stress. That allows us to minimize the negative impact on the animal’s welfare by changing the environment.

For each of the five areas identified by the Farm Animal Welfare Council, concerns remain relevant. Veterinarians and animal owners continue to discuss the different interpretations of these Freedoms and how each is intended to work for the various animal species and the myriad of environments in which the animals occupy. The resulting veterinarian-animal owner team approach remains the best way of striving toward the mutual goal of providing good welfare for the animals in our care.

Bonnie Beaver, DVM, DACVB, is graduate of the University of Minnesota College of Veterinary Medicine who lives in College Station, Texas. Dr. Beaver is a professor in the Department of Small Animal Clinical Sciences at Texas A&M University.