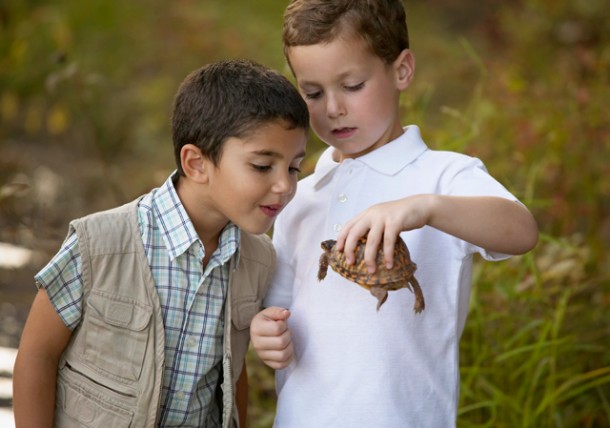 In 1975, the U.S. banned the sale of turtles less than four inches long in an effort to prevent turtle-associated Salmonella infections (salmonellosis) in humans. Salmonellosis is caused by a bacteria that, when ingested by humans, can cause symptoms that commonly include diarrhea, stomach pain, vomiting and fever. While these clinical signs typically subside within a week, some people can become ill enough to require hospitalization. Severe infection can cause septicemia (bacteria in the bloodstream) and, rarely, death.

Although other reptiles, such as snakes and iguanas, can also carry Salmonella, small turtles are believed to be at higher risk for exposing young children to the disease. Children might be more likely to handle small turtles or place the animals in or around their mouths, and may accidentally ingest the bacteria. While the animals may carry the bacteria, they usually do not become ill and do not appear to be sick. Therefore, the animal’s behavior and appearance provide no information as to whether or not you might get infected from them.

Special guidelines for child-care centers have been developed due to the serious nature of Salmonella infections in young children. The Texas Department of Family and Protective Services prepares and enforces minimum standards for child-care centers. Due to the risks of being exposed to Salmonella, these standards prohibit children at child-care centers from having contact with reptiles (including turtles, snakes, lizards and iguanas), as well as other animals such as chickens, ducks and amphibians (including frogs and toads) that may also carry the bacteria.

In Texas, all stores that sell reptiles are required to distribute written warnings to people who buy reptiles and post warning signs regarding reptile-associated salmonellosis. This law, plus samples of the signs and warnings containing the required language, can be obtained through the Texas Department of State Health Services.

The Texas Parks and Wildlife Department also has regulations that require a non-game permit for possessing, transporting or selling certain species of turtles. However, the federal law that bans the sale of small turtles (shells smaller than four inches long) overrides this law and is still in effect. If you suspect that somebody is illegally selling these animals, please contact the Texas Parks and Wildlife Department.

If you find turtles in the wild, do not disturb them or make them pets. Previously captive turtles might have difficulty surviving if released into the wild.

(General information on salmonellosis)
www.cdc.gov/healthypets/resources/amphibian-reptile-poster.pdf
(Poster on exposure to Salmonella by reptiles and amphibians)