How to Prevent & Stop Dog Fights 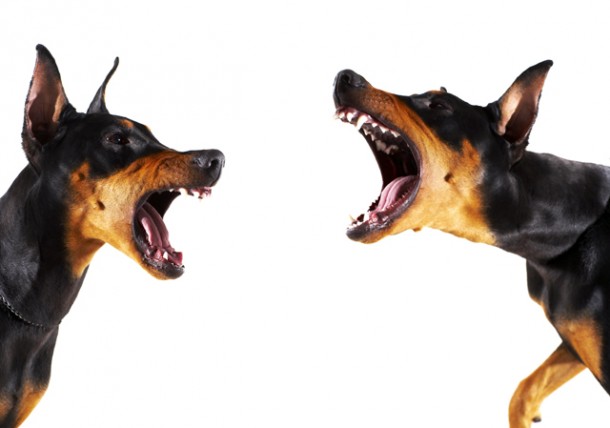 Injuries from dog fights are a common cause for veterinary visits. Injuries can range from minor to life-threatening. If your dog has been involved in a fight, always seek a veterinary exam, even if injuries seem minor. Bite wounds and lacerations have the potential to become infected and can be difficult to find under hair. Wounds that appear to only be simple puncture wounds can have deep damage and cause tearing of tissues under the skin.

Why Do Dogs Fight?

Dogs may fight for a number of reasons. Even dogs that live together or are related can and will fight. Unfortunately, some fighting dogs will not stop fighting until an injury occurs that results in one dog backing off. However, some triggers are easily identified and can be avoided. Multiple dogs of the same sex that live in the same house (all female or all male) may be at a higher risk of fighting. This is due to a constant desire to maintain a hierarchy. In the wild, there is a separate hierarchy structure for males and females within a pack, so a male and a female together in the same home are potentially more likely to maintain harmony as they are both maintaining their own separate “top dog” statuses. The risk for fights is not lower between related dogs as compared to dogs that are not related; family members may fight each other once the younger pups have reached adolescence. The risk for fighting is increased in dogs that are not spayed and neutered.

Food and toys are common triggers for fights. We all want what we don’t have, dogs included. Many dogs are inherently possessive and aggressive of their possessions, like chew bones, food and squeaky toys. Never feed two dogs next to each other. As one dog finishes his food, he may decide to eat the other’s food or may even protect the bowl of food without eating. It is much safer to feed multiple dogs on opposite sides of the room or even in different rooms. If your dog is possessive about food, it can be beneficial to not leave food bowls on the ground. When the meal is finished, immediately take up the bowls, wash and store them out of the dogs reach until the next meal.

Bones and chew toys are other highly desired items. Most dogs will hoard and become extremely possessive of bones and chew toys. It can even be dangerous for people to take bones from some dogs. If you own a dog that displays possessive behavior, all bones and chew toys should be removed from the home. If you ever need to remove a bone or toy from a dog’s possession, never use your hand. Attempt to distract the dog with another toy, treat or food item thrown in the other direction. You can also try to change the mindset of a dog by holding up a leash and saying, “Let’s go for a walk/outside/to the car” or whatever excites the dog. Then take the dog to another room or restrain on a leash when picking up the toy.

Some environments are more likely to trigger fights, such as dog parks, family vacations or even boarding in close quarters. At a dog park, there are many dogs that are strangers to each other. While in this environment, they are running, chasing and excited. It is easy for a group of dogs to start running together, forming a “pack mentality” that can promote aggression. Dogs at the dog park do not have a hierarchy established, and if multiple dogs are running for the same Frisbee or ball, the excitement can easily get out of hand. Additionally, some dogs are protective of their owners, and a dog park can be a threatening place, making one feel that he or she must keep everyone away from “his” or “her” owner. If your dog park tends to be crowded, consider going at off-hours or other non-crowded times.

Family vacations mean a lot of people and potentially multiple dogs that are unfamiliar with each other in the same house. This is probably the leading cause of dog-fight injuries during holidays. When many new people and dogs come into a dog’s house, the dog that normally resides in the home can become threatened and possessive, even if he or she is normally a very docile dog. New dogs can mean new threats to “his” or “her” toys and food. Likewise, the visitor dog may try to dominate their new surroundings.

Just as family vacations can be stressful for people, they can create a stressful environment for dogs, which is something dog owners should be aware of. When visiting, always remember that your pet may need some downtime in his or her own room or kennel. Be mindful of what your pet considers to be “theirs,” and remove these items before company arrives. Feed unfamiliar dogs separately.

How to Stop a Dog Fight

Never use your body to stop a fight! When dogs are fighting, instinct and drive have taken over. You can be easily bitten if you try to pull two dogs apart or separate them with your body. Never kick at a dog because their common reaction may be to turn and bite your foot.

It is understandable that your reaction would be to stop the fight by doing whatever it takes. However, physically intervening in a dog fight puts you at risk for getting bitten. Dog bites can result in legal action as well as the costs associated with treating a bite wound at a human ER or urgent care clinic. Complications from bite wounds can lead to severe pain and infection and permanent tissue damage, sometimes even requiring plastic surgery.

Instead of using your body to stop the fight, use a broom or chair or spray water on the dogs with a water hose to separate the dogs and stop the fight. Try making a loud noise such as slamming a door. However, don’t yell at the dogs; your excitement can add to the dogs’ excitement and escalate the fight. After the dogs are separated, keep them separate for several hours in different rooms and always seek veterinary care.

How to Prevent a Dog Fight

If fights are becoming more frequent, a consultation with a veterinary behaviorist may be in order. Speak with your family veterinarian about options for a referral to a specialist. Remember that with basic obedience training, dogs learn to listen to owners better, and while aggression is building prior to a fight, the owner may be able to stop it by giving alternate commands, changing the dog’s focus. Behavior training takes commitment and time and should always be tailored to each individual family and pet.