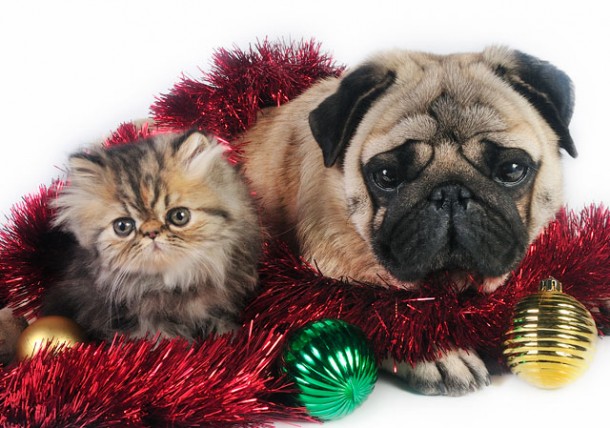 With the arrival of the winter months and holiday season, there are some health hazards that are of concern for pets, some of which are potentially fatal. To keep the holiday season safe, protect animals from contact with or ingestion of the following holiday health hazards:

Antifreeze contains ethylene glycol, a product that can cause lethal kidney failure and metabolic acidosis (accumulation of acid in the blood and body tissues) if ingested. It has a sweet taste that attracts animals and can be toxic in very small doses (e.g., one to two tablespoons can produce toxicity in a medium-sized dog). Antifreeze can be toxic even when diluted in water.

At least one brand of antifreeze is available that has an active ingredient of propylene glycol, which usually has to be swallowed in larger quantities to produce toxicity. Additionally, propylene glycol-based antifreeze does not metabolize in the animal’s system to form products that cause kidney damage. However, it can still cause illness and death via metabolic acidosis.

An antidote is available for antifreeze poisoning, but early recognition of ingestion and immediate intensive treatment are imperative for the long-term health and survival of the animal. The best medicine, though, is to prevent animals from being in contact with this toxic substance by having antifreeze changed by a professional who knows how to properly dispose of it. If individuals change their own antifreeze, they should not drain it into the sewer or leave it sitting out in a pan for any amount of time (all it takes is a few seconds for an animal to ingest it). It is worth noting that some snowglobes may contain this product as well, so keep them out of reach of your pets.

Chocolate and xylitol are commonly found in the sweet treats of the holiday season. Both substances are dangerous and can cause toxicity in animals. Baker’s or baking chocolate is the form of chocolate that contains a higher concentration of stimulant (theobromine) than either semi-sweet or regular milk chocolate. The extent of toxicity an animal exhibits after consuming chocolate is based on a variety of factors, such as the type of chocolate ingested, the size of the animal or an animal’s individual sensitivity to chocolate. Dogs in particular are attracted to sweet treats. Some typical clinical signs of chocolate toxicity include excessive excitability, restlessness, increased heart rate, muscle tremors, difficulty walking, increased thirst, increased urination, vomiting and diarrhea. The last two clinical signs may be transiently present due to an animal consuming any amount of chocolate (i.e., any ingestion of chocolate may cause gastrointestinal upset but not extensive toxicity). The literature gives a wide range of toxic levels, so a veterinarian should be consulted immediately to discuss the appropriate action to be taken, as vomiting may be induced within two hours of the chocolate consumption. There is no specific antidote for chocolate toxicity, but supportive treatment can be rendered.

Xylitol is among a group of sugar substitutes classified as sugar alcohols (somewhat a misnomer as they are not alcoholic); it might be found in some “sugar-free,” “reduced-sugar” or “diet” foods, such as gum, candy, baked goods, ice cream and peanut butter. Look for the term “xylitol” or the general term “sugar alcohol” on food labels when checking for ingredients. In dogs, even a small amount of xylitol can cause toxic effects. It also can be fatal. If a dog consumes xylitol, it can cause hypoglycemia (sudden decrease in blood glucose) and/or liver failure. If you suspect that your dog has eaten a product containing xylitol, you should take it to a veterinarian immediately, as signs of toxicity can start within 30 minutes of ingestion (signs also could be delayed for a few days). Some of the clinical signs of xylitol toxicity in dogs include weakness, lethargy, vomiting, diarrhea, muscle tremors, seizures, anemia, increased thirst, increased urination and bloody or tarry feces. There have been some indications that ferrets may react to xylitol in the same way that dogs do. Cats may also exhibit some of these clinical signs if they ingest xylitol. However, xylitol poisoning in cats appears to be rare, possibly because they may metabolize it differently or because they typically are not interested in eating food products that contain this substance.

A romantic prop often used in the spirit of the holidays, the berry of the mistletoe plant is the most toxic component, especially if it is chewed instead of swallowed whole. If the berry is ingested in sufficient quantity, it can cause gastrointestinalOf or relating to the stomach and the intestines. and neurologicalOf the nerves and the nervous system. distress signs, including convulsionsA sudden, violent, irregular movement of a limb or of the body, caused by involuntary contraction of muscles and associated especially with brain disorders such as epilepsy..

Whether or not poinsettias are toxic has been debated for years. The most recent findings are that it contains no toxic chemical. However, as with any plant that an animal is not accustomed to eating, it can cause diarrhea and vomiting, which are protective mechanisms to eliminate foreign substances. Animals tend to be attracted to poinsettias, so it is good practice to keep these plants out of their reach.

The ivy plant is not acutely toxic, but it can cause gastrointestinal upset (nausea, vomiting and/or diarrhea) if ingested.

Christmas cactus is nontoxic, but it can cause vomiting and transientLasting only for a short time; impermanent. diarrhea if consumed.

Cats in particular are attracted to playing with Christmas tree tinsel. And since many households utilize it during the holidays, pet owners should take notes. If ingested, it can cause an intestinal blockage or intussusception (prolapsing of one part of the intestine into the cavity of an immediately adjoining part). If indoor cats are present, it would be prudent to avoid using strands of tinsel. It also would be advisable to place breakable holiday ornaments at the top of the tree. An investment in shatterproof ornaments also might be worthwhile.

The U.S. Animal and Plant Health Inspection Service’s Animal Welfare Act recommends that ambient temperature should not drop below 50 degrees Fahrenheit, especially when sick, aged or young animals are present. If it does, plan to supplement the animal’s environment with auxiliary heating and additional bedding. Additionally, animals should always be provided with adequate protection and shelter from the direct effect of wind, rain or snow. Remember that animals in Texas are not acclimated to cold weather so they must be protected from extreme weather conditions accordingly. Allowing pets indoors is a great way to protect them from harsh weather.

If you know or suspect that an animal has ingested any of the above items, immediately consult a veterinarian, animal emergency clinic or poison control center. The Texas Poison Center Network can be reached at 800/222-1222. The ASPCA Animal Poison Control Center can be reached at 800/548-2423.

Thanks is given to Dr. John C. Haliburton, former Head of Diagnostic Toxicology for the Texas A&M Veterinary Medical Diagnostic Laboratory in Amarillo, for his assistance and expertise in preparing this article.